Judging by the name of the band alone, Tortilla Flat must be a fun bunch to hang out with – their music is no less entertaining than the group’s name and cheeky album titles.
On their recent studio album, “Forward to The Past”, the band set out to take their blend of Celtic Punk music to the next level, echoing the work of artists as diverse as Dropkick Murphys or Flogging Molly, just to mention a few.

The album features 12 songs that showcase the band’s blend of hard-hitting punk grooves and beautiful Celtic-inspired melodies. Following an epic introduction (“1946”), the album kicks off with “The 45 rpm (Vinylcrackel)” – When listening to this track, I find myself wondering…is this what the Sex Pistols might have sounded like had the embraced some Celtic folk influences in their music?

Tortilla Flat immediately reveal their passion and allegiance for timeless ’77 punk rock, with solid rhythm sections and full-on guitar tones. The following song on the setlist, “Forward as One”, is perhaps one of my favorite tracks on the entire album. The drumbeat is absolutely anthemic, while the bagpipes create some deep, almost ancestral tone. It’s really interesting to see this intro develop into a full-on punk rock song that make me think of greats like Rancid or Anti-Flag.

“Seven Drunken Nights” is also one of those tracks worth a special mention. The song is a fast-paced, hard-hitting jam that combines the energy of punk rock with the ironic storytelling of folk music, going for a fun and engaging twist. It’s not all fast beats and loud guitars: “Tough Love 2016” reveals the band’s softest side, going for a timeless acoustic ballad sounds. The warmth of the strummed guitars falls in perfectly with the bagpipes and with the mellow lyricism of this song. The tune later picks up a full-band arrangement, almost reminding me of a more Celtic Social Distortion!

All in all, this album is absolutely enjoyable for any fan of no-frills punk rock, with an extra twist. The bagpipes and Celtic/Folk music influences of the band truly add some personality and character to the songs, making for something truly special. 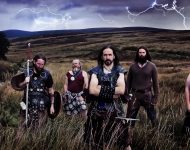