On February 23rd at The Town Hall in New York City, it was a night of celebration for the 80th anniversary of folk music legend Woody Guthrie writing of the classic song “This Land is Your Land.”

From Elementary schools to the Super Bowl, the song has been part of American culture for eight decades as an inspiring anthem for what America is, and can be. Many artists took part in the show, including Bluegrass/hip-hop fusion act, Gangstagrass.

Gangstagrass have certainly followed in Woody’s footsteps by creating music that is filled with marvelous melodies and authentic vibes that sends a positive message.

The night’s lineup featured many other amazing artists such as Haley Heynderickx, Jeff Tweedy, Tony Trischka, just to name a few. The band also got to collaborate with and perform alongside soul/funk artist, Branjae. This was a real treat as it’s always great to see Gangstagrass live as their chemistry is second to none, and they bring that same passion and can connect so well with other artists that they work with.

Proceeds from the show are being used to help contribute to the Woody Guthrie Center to continue its mission of sharing Guthrie’s message of diversity, equality, and social justice, providing tours of the museum, outreach programs, admission to the museum, and music workshops at no cost to students. 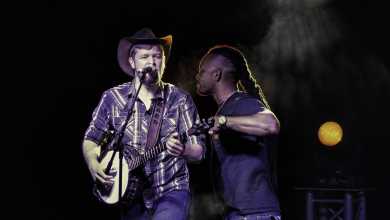