New Years Day’s live show at the House Of Blues in Houston was a high-powered and energetic alternative metal show. Ash Costello vocals are dynamic and powerful, as she owns the stage with her compelling presence and stunning vocal range.

One of the first songs the band played was their hit single “Kill Or Be Killed” and kicks off the show with a “sacrifice” to the metal gods. There is a charged and electric atmosphere in the air as they tear through their eclectic and punchy set list. In their music, New Years Day seamlessly blur the lines between different genres.

They move freely between alternative metal, gothic, post-hardcore, and pop punk. One of the reasons why New Years Day is so captivating is because their style is hard to pigeonhole. The bands melodies shift between catchy and expressive to explosive and intense. New Years Day isn’t confined by rules and expectations; they are dedicated to crafting high-powered songs infused with deep and eloquent lyrics.

Frankie Sil is responsible for the throbbing and deep bass line that immerses the audience in the chaotic soundscape that is a signature of New Years Day. Together, the guitarists Nikki Misery and Austin Ingerman create a heavy and gritty multi-layered instrumental, that lifts Ash’s vocals to shine through.

One of the stand out performances in the show is “Shut Up,” from the bands recent studio album release. It’s one of the most poignant tracks in New Years Days of the record. This song has an edgy lyrical composition mixed with New Years Day’s classic “in your face” attitude. This song is absorbing because of the tonal contrast. It also has an attractive pop-punk aesthetic that is beautifully paired with power and noise from the band.

Another stand out from the show was “Defame Me”, a driven and aggressive song. Ash’s vocals are raw and beautifully expressive on memorable lyrics such as “you’re with me / or against me.” The band has a hypnotizing chemistry and they almost seem to act as one entity. With Ash leading the charge with her sensual and candid vocals, New Years Day’s performance at the House of Blues was truly captivating!

For more dates and information about their tour, check out the bands official website, and be sure to pick up their new album “Unbreakable” 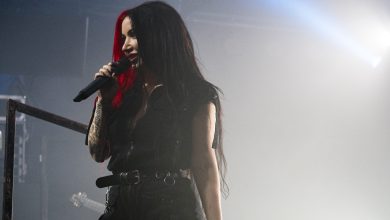 New Years Day In MI – An Interview With Nikki Misery