New Year’s Day are currently on tour in support of their latest album, “Unbreakable.”  The band recently stopped by in Michigan to play a show,  and there I caught up with Nikki Misery to talk about their latest release, and how the record was a large evolution for the band.

Okay, so thanks for speaking with me today. I heard a happy belated birthday is an order.

Nikki: Oh, yeah! Yeah, it’s finally over! I get so weird on my birthday. When everybody from the moment of  that first midnight, to the second midnight, in there I’m just like “uuh, yeah yeah yeah. Thank you, I appreciate it.” And then,once it’s 12: 01 someone says, “Oh happy birthday!” I’m just, “thanks It’s over now!”

When was your birthday again?

Nikki: Oh, right on! Well happy belated birthday to you! 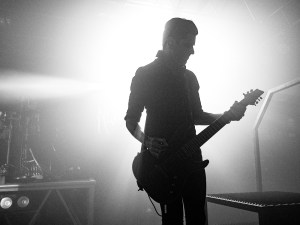 Thanks! So you guys are fresh on the scene with ‘Unbreakable’ and have a fantastic new video for “Come For Me,” how are fans responding to the new material?

Nikki: They are loving it! And some are hating it, which is half the fun too because you can’t make everybody love everything. But no, I’ve loved the reception we’ve had so far. We released “Skeletons” and then we announced the album. The first major release was, “Shut Up.”

It’s very hip hoppy trappy, almost music wise, and a vocal melody. Then we all come in hard hitting, and it’s so funny because when we put it out everyone was, “Oh! New Years Day has gone Pop!” And it’s like, its one frickin song, relax!

But at the same time too, you know as artists, I always feel like It’s your job to push these boundaries. Screw genres. You know, I don’t want to be just a rock band that plays rock music and this is all we play.  We’re artists, this is what we do. If you guys are can’t comprehend that yet. It’s fine. You’ll evolve eventually.

I think curiosity though, keeps you from being stale. As an artist, if you are constantly doing the same thing all the time not really growing, you’re just going linear.

Nikki:  Yeah. You know, I’m Sure we can still make some kickass music, but why not explore and move on. But for the most part fans have been loving it, and it’s awesome.

But I still just feel like I’m like this this dumb little kid from Santa Ana that’s like, nobody really likes anyway, so the fact that like we’re here, you guys want to talk to me, that’s the coolest thing.

You guys do have a huge following. You should’ve seen the uproar at The Fillmore last year, it was nuts.

Nikki: I’m one those people and, I’ll see it, and I love it, and respect it. And I’m very humble and I just don’t believe it. It feels like I’m going to go to sleep after this amazing show, and then wake up and I’m like 12 and my mom is saying ‘it’s time to go to school.” And I will be like, “oh my God my whole life was just a dream!” But it’s really awesome, and it’s very surreal.

Since joining the band, would you say that ‘Unbreakable’ has been the biggest change in terms of how you guys approach music?

Nikki: Absolutely. We actually had time to record this album. Before with every album, you only have maybe three weeks to a month. This time we had time to let the songs marinate and sleep on it, you know. We were able to just really pinpoint and obsess over any small little riff and note that we played. I felt like like this time, we actually had a consensus where all of us we’re happy and comfortable with it.

Nikki: Yeah, we’re all about it.

How many of the new tracks have you incorporated into your current set?

Nikki: I think it’s like half the set now, I’m the kind of person that wants to put more in, I’m ready for this!”  Just time wise we had cut some out with the headliners, people want to hear more than just the new stuff.

Yeah, I have to say as a fan, when I don’t hear my fave I’m a little brokenhearted.

Nikki: Same! “Why did you write that song if you’re  not going to play it for me today?”

Exactly. The guitar work on this release is as stellar as ever. Was it approached differently, such as working with others, writing more, or was there a typical working method that was stuck with?

Nikki: Yes, it’s all those things. We have Austin Ingerman on guitar now, last time we had Jeremy. Especially one of the biggest things that I mentioned before is that we actually had time. It wasn’t like “okay, that’s the riff we’re going with.”

We would play something and go, “oh that’s a cool riff, keep it there.”  Some songs such as “Come For Me,” or “Unbreakable,” we did that first riff, then put away for about a year, and then came back and was, “wait, what about this?” Then start working on it. It’s a lot of things, the experiences, the band’s we’ve been touring with, and Ashes vision.

The way Ash kind of writes music, she’s not as hands-on with instruments, but she has these thoughts and ideas and here we are trying to put sound to her stories and ideas. So it’s all those things and more. Plus a little voodoo helps too.

The current tour seems to be taking you everywhere. And you’re going to be doing  some shows with In This Moment as well. What’s it been like showing the stage with them?

Nikki: It’s been awesome. Their whole team, and their crew, and that band are amazing people. Same with  Halestorm. You know, we did that all pretty much last year. And it’s so humbling and refreshing to know that these big giant bands treat you so much better than some of these half-ass bands that we’ve toured with before. And it’s crazy to see the big headedness, the egos of some of these bands when you’re like, “guys, who the fuck are you all now?”

I know exactly what you’re talking about, but can’t name any names.

Nikki: Oh I definitely could, (laugh) But still it’s almost sad you know, we’re all in this together. We’re all working for the same thing. I’m not trying to step on your toes. We’re just doing it with the shit you give us.

Do you think that’s part of what it is? You’re stepping on toes, you’re coming up with fresh material, broadening your fan base. And maybe that touches a nerve with people.

Nikki: It could be. I mean, I guess if you’re that easy to take down.

You seem to still have the appreciation for the opportunities that you’ve been given, and the traveling that you’re able to do. I think sometimes people have been in the game for too long just get envious of that, and their only outlet is to kind of keep you at base level.

Nikki: It could be. It never works going that way though. But I mean, I remember being on certain tours, you know, and you’re like, wow, there’s  way bigger bands who treat all of us, not even just like the band, but like the crew from like ,whatever. It’s like we’re all on the same level.

Nikki: And it’s so cool to see that there’s still people out there like that.

I wanted to ask about your video for “Come For Me.” There are some exciting guest appearances that are featured. What pushed you to work with these artist?

Nikki: A lot of them are just people around the scene that we know. A lot of them are on our label like Body Count, Offering, and then of course like Spencer from Ice Nine, we just got off tour with them. And there are just some of the raddest and nicest people that are around.

Nikki: Yeah. I remember checking all of theses emails and they are “yeah, we’re all coming!” We were “Oh sweet, we’re having all of these guest appearances, rad!”

Nikki: It’s always nice to see them. Basically, it’s like coming back from winter break and you get to see all your friends again.

Yeah. And I’m excited for you guys with the upcoming tour. You’re going to be meeting up with In This Moment again, when? is it in Toronto?

Nikki: Yeah, we meet up again in Toronto. We started the tour with them I believe?  It’s been like choppy, you know, we did a bunch of shows with them.

I’ve been trying to catch you both at the same time!

Nikki: Yeah, it went like a headliner for us, and then with them…. I just stopped looking at the schedule now, if I see a big spot, i’m just like “ah!”

You are where you are.

Okay. Well, thanks for taking time out to chat with me, I really appreciate it. Is there anything else that you’d like to say to our readers or your fans?

Nikki: Absolutely, thank you guys so much for supporting and just being a part of not just this band, but music in general. This is what it’s about, this is how we create a new scene and new bands,  thank you and keep supporting! 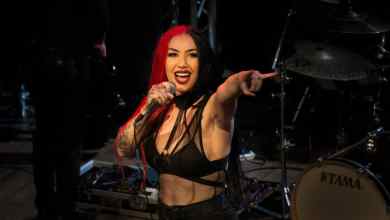 New Years Day – At House Of Blues In Houston TX