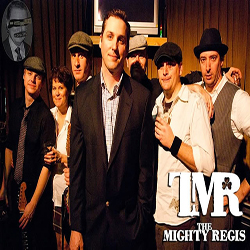 You probably didn’t think Molly Malone’s out in California was capable of housing any more musical genius after Flogging Molly. Think again. They’re called The Mighty Regis, a seven-piece complement of accordion, two guitars, mandolin, bass, drums, and tin whistle versed in deep folk-punk roots. Their lyrics are fast and witty, and with the added vocals of Ryan O’Neill, The Mighty Regis, though junior in comparison to bands of similar talent, with only two album releases so far – County Sligo in 2007 and Another Nickel for the Pope in 2008 – is without a doubt one of the best bands on the scene.

Another Nickel for the Pope is proof that sequels can be just as good as the original, and possibly better. While Co. Sligo had the haunting spoken rendition of The Parting Glass and songs like The Real Deal Irish and Reilly’s Daughter to recommend it, Another Nickel for the Pope brings to the table a tribute to their home base with the song Molly Malone’s, a witty jibe at Scotland (You Owe Us), and my personal favourite – Drinkin’, Laughin’, Dancin’, Fightin’. Both albums are well worth the money spent. If you’re a fan of Irish Punk, you’re sure to become a fan of The Mighty Regis.

Another amazing Celtic Punk band housed by Molly Malone’s. The Mighty Regis music has witty lyrics with a fast tempo.