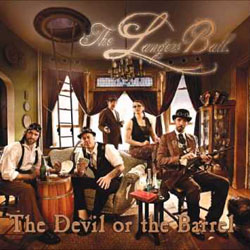 I remember the first time I listened to a Langer’s Ball song. It was a cover of Steve Earles Galway Girl. Listing to it was like a breath of fresh air, especially after Gerard Butler had butchered it in the movie PS I Love You. Needless to say, the rest of the tracks on their debut album, As I Roved Out, were just as good. I was really impressed at what this baby band, consisting of Michael Sturm and Hannah Rediske, could pull off. A couple of years later, they released their second album, Ships Are Sailing. When that cd came in the mail, I was a little excited. It was as if I were Steven Martin in the movie The Jerk, with my mailman looking on. For those of you that have no idea what I’m talking about, go to YouTube and search for “phone book The Jerk.”

In 2011, The Langer’s Ball released their first live CD, Drunk, Sick, Tired. It was definitely one of the best Irish punk albums of the year. Now here we are one year later, and that baby band from Minnesota is all grown up. Michael and Hannah have now filled up the group to make a five piece band. The new members include Drew Miller on bass guitar, who is no stranger to folk punk and he’s also the bass player for another Minnesota band, Boiled in Lead. Derek Jamies, former member of The Wild Colonial Bhoys on drums, and Trevor Jurgens on electric guitar. I should point out that Trevor has history in the Minnesota punk and the Rockabilly scenes.

Ok, moving on to the new album, The Devil of the Barrel. I was lucky to get a sneak peek before the release, and now that the physical copies are out, it’s review time! There are 13 tracks with a mix of both covers and original material. The run time is almost 45 minutes, which is average. My over all opinion is, it’s the best release from the band to date.

The opening track, Whiskey Chaser, uses clever wordplay. It’s not so much about drinking a stout after downing some of the “the rare old stuff,” but rather traveling all over the United States drinking whiskey. Hence the song title. Overall it’s a pretty decent song and a really good opener, it features some banjo, tin whistle, and a really faint guitar sound. Speaking of the guitar sound, this is where you start to hear a Rockabilly style that Trevor Jurgens tends to play.

Moving onto track number two, I know my love. It’s a traditional Irish song that was written in the early 1920s, but it wasn’t really made popular until The Chieftains and The Corrs did a recording of it in 1999. As much as I love The Chieftains, it’s best to avoid that version and just listen to the Luke Kelly or Langer’s Ball cover. One of the things I really like about this song, is how new instrumentals gradually start playing after each verse. An acapella version also would’ve done well.

I’ll admit, sometimes when reviewing covers it’s hard to keep the nostalgia from talking. It’s not easy being an objective critic when you’ve grown up on such great traditional Irish music. For example, people will often claim that song X is superior because it was recorded first by artist Y. Simply because artist Y made it a hit, or because it reminds you of better days listening to it in your youth. Now I’ve liked covers better than the original before, but that kind of mentality didn’t truly leave me until I heard The Langer’s version of Patriot Games. I can still be pretty stubborn about it, and I didn’t think lightning could strike twice, but then I heard Johnny Jump Up. In my opinion, The Langer’s Ball version of this old Tadgh Jordan tune is the best yet. That’s really saying something considering artists such as Christy Moore and Jimmy Crowley have preformed it.

The song Rye Whiskey has an American western folk sound to it, which is appropriate. It’s about American Whiskey after all. I know a lot of our readers are fans of American folk music, and this track in particular will satisfy your craving. Real Old Mountain Dew, is the first of several tracks from the bands 2011 live album Drunk, Sick, Tired. The tin whistling on this track is similar to the melody of the song Waxie’s Dargle. I’m not entirely sure if it’s just a coincidence, or what they were going for, but it works well. The course is the really fun part and what stands out in this song. It’s made up entirely of nonsense words that only the Irish can do. Well, and Little Richard too I suppose, A whop bop-a-lu bop a whop bam boo.

The Little Vagabond is a contender for my favorite song on the album. It’s a poem written by William Blake in the late 1700s. Then some time in the late 80′s, it was put to music by American folk singer Greg Brown. It has a nice tune and it’s made even better with the Langer’s style.

On to Kick Around. Now I’m pretty sure I know just what this song is for. The band illustrating their exceptional harmonization. That goes for both vocals and instrumentals. There’s not really an instrumental break in the song, and I would’ve liked that. Especially with the accordion and guitar going together like peanut butter and jelly.

Now on to the covers All For Me Grog and and Fields of Athenry. All For Me Grog, is the second song that was originally on their live CD. It’s a traditional Irish /sea shanty and it’s a real popular song at Renaissance festivals and pubs. Fields of Athenry doesn’t really have anything that different in their cover. The great banjo playing is definitely a bonus, but if you’ve heard this song once (and I know you have) don’t expect anything totally different in The Langer’s Ball version. With that said, it’s a really solid cover, and I enjoyed it. Songs like One More are reasons why I love this band so much. Not only do they put out quality covers, but their original material, like One More, is fantastic. So, I’ll be hopping on the bandwagon by saying that this is one of my favorite songs on the album.

Wild Rover Polka is a fusion song between The Wild Rover and Beer Barrel Polka. All I have to say is it’s very creative and nicely done. The transition from Wild Rover to Beer Barrel was well executed. It doesn’t jump from one song to the other, but it starts slowly with an instrumental break. It’s a Macaronic tune that uses English and some German words. Now I’m aware that Polka spread all over Europe, and as far as Mexico, but I was curious, why German? I was thinking perhaps it would have been more authentic if some of the words were Polish or even Czech. I had to get to the bottom of this, so I asked my German friend whose father is from Poland, and who knows her polka, what the deal was? Her response to me was “the Polish language sounds like a Russian cat Hacking up a hairball, it’s terrible.” Well all right then, I’ve got my answer and I’m just going to assume that’s how the band feels as well. It’s a rocking song, and one of the best cover(s) on the album.

While I left out a few songs in this review (that are superb) it’s time I give you my overall opinion. The new band sounds great and this is their best release thus far. We had a lot of songs about whiskey, and a couple songs about a boy named Johnny. It sort of makes you wonder if The Devil Or The Barrel was a whiskey themed album. All of their songs are delivered with such enthusiasm and passion, and that my friends is what makes a great band. If you’re a first-time listener, I suggest that not only do you buy this album, but all their previous releases. I say that not only because their previous albums are so good, but I also don’t want you to have a narrow minded view of their work. It’s a whole lot more than just fun, good time drinking, songs. This is likely going to be one of the best full albums of the year.

The Devil or The Barrel is the best release from the The Langer’s Ball. This album has a lot of covers, and great original material. 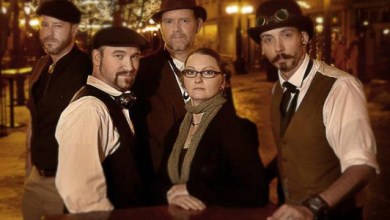 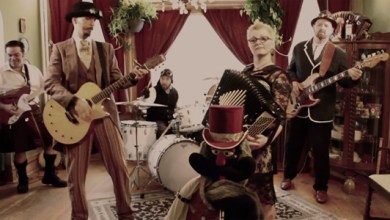 The Langer’s Ball Will Debut A New Band