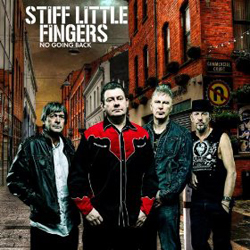 Well, it’s the fourth year of a new decade, and you know what that means. It’s time for new studio material from Irish punk legends Stiff Little Fingers! For a band that’s been around since 1977 (not including a short break in the mid-80’s), they’re sounding impressively energetic and spry on ‘No Going Back.’

The band may sing of proving they’ve still got it to the naysayers on album closer ‘When We Were Young,’ but the plea is unnecessary as the catchy aggression of the music speaks for itself. These guys have still got it.

‘Liar’s Club’ is as catchy, fun and snarky as anything you’ll find in their catalogue, while ‘My Dark Places’ is filled with positive self reflection and a concerted effort to better oneself.

‘Full Steam Backwards’ features that unmistakable Jake Burns voice that sets off a reaction of nostalgia, immediately connecting your thoughts to the ironically titled ‘Nobody’s Heroes.’ ‘I Just Care About Me’ sets a catchy chorus refrain of punk-inflected sarcasm against even catchier riffage in the verses.

‘Don’t Mind Me’ splices in some neo-ska to a bass driven wall of impressive musicianship from the whole band. ‘Guilty As Sin’ see’s the band connecting more directly with their Celtic roots than anything they’ve written before. I’d also like to point out, while a band known for pure aggressive punk rock to try their hand at a more traditional folk tune might bring a raised eyebrow from some, they needn’t be concerned.

The song itself reiterates why theses guys are musical legends. ‘Guilty As Sin’ is one of the record’s best tracks. A perfect mix of something new, yet timeless, while still retaining that SLF sound and spirit. ‘One Man Island.’ is a tune that speaks for community and fair treatment. It continues on with the very uplifting theme the record has exemplified. In short: positive music for positive people.

‘Throw It All Away’ has a Creedence Clearwater Revival vibe to it, while ‘Good Luck With That’ has a classic, early 80’s sound that’s as welcome today as it was back then. ‘Trail of Tears’ sounds like a perfect mix of Stiff Little Fingers and Social Distortion, to exciting results. Finally, ’Since Yesterday Was Here’ is an extremely versatile song. Rumbling rhythms standing next to wailing guitar leads and sharp edged start-stop verses. It sounds like three songs rolled into one.

For a band that’s been around as long as SLF has, they have a surprisingly small number of studio albums under their belt. And while their endless archive of live album releases is always a
welcome spin, new studio material, even if does only come once every ten years, is cause for excitement every time it drops.

In many ways, this record is less overtly gritty or aggressive as ‘Guitar and Drum’ or much of their back catalogue, but that isn’t so much a sign of softening with age as it is a refining of songwriting ability.

The overall message on the record is one of brotherly love and harmony without ever sounding cheesy or sappy. Burns’ writing is as sharp as ever on ‘No Going Back.’ The boys sound, unsurprisingly, tighter as a group and in better command of their instruments than they ever have before.

The songs on ‘No Going Back’ feature some of the old classic SLF flavor we know and love, while making room for a couple of new things as well. They touch on every era of a band that has remained remarkably true to the sound it created for itself some 37 years ago, and that’s absolutely incredible.

Unsurprisingly, "No Going Back" has turned out to be one of the best Punk rock albums of the year.