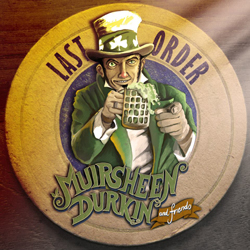 Muirsheen Durkin and Friends’ Last Order is, above all things, a party album through and through. With Ten lively renditions of traditional Celtic favorites, the band make it easy to love this.

‘Marie’s Wedding’ is an old Scottish folk song originally written by a popular (in his time) Gaelic singer named John MacDonald Bannerman. A song that was ahead of its time, if you ask me, considering it was written in the 30’s. Muirsheen Durkin give it a proper tempo boost, and it’s hard listening to the song without grabbing whoever’s closest to you and throwing down right there.

‘Santy Anno’ is an old sea shanty that’s been around so long, who knows who originally penned it. One of those tunes that have been passed down from generation to generation with as much gusto as the generation before. It’s been covered by many bands and artists in many genres and Muirsheen don’t attempt to do much with it other than to keep its raucous spirit alive. It’s one of the best cuts on the record.

Jersey band The Skels are represented with the cover of their banjo driven bar stomper ‘Have A Drink Ya Bastards’ appearing here sans banjo, but with an extra shot of punk energy. I love The Skels and won’t bother saying which version is the better one. They’re both amazing and unique to the band playing them.

‘My Son John’ is another English folk classic, sometimes known as ‘Mrs. McGrath’ depending on who’s covering it and who they’re singing about.
It’s not as hard charging as the first few songs on the album, has kind of a Celtic shuffle to it. It’s very well done though and keeps the quality of the album high as the band speed things up again with ‘Irish Pub Song.’

This song is a favorite cover among Celtic punk and rock bands, and with good reason. Not only is it singularly about what it claims in its title, it’s a hell of a tune and demands a filling of the dance floor wherever it’s playing.

‘Greenland Whale Fisheries’ is another sea shanty whose most popular rendition was by The Dubliners. Until The Pogues got a hold of it in the 80’s and gave it their particular brand of drunken punk and Celtic styling. Muirsheen Durkin’s version certainly seems to reproduce, nearly note for note, The Pogues version. Which was a good call. I love The Dubliners version as well, but once you’ve heard The Pogues break it down, it’s hard to go back.

‘The Minstrel Boy’ is an old Irish song by Thomas Moore. The version on this album is sped up a little from the more traditional beat, but not by much. Which again was a good call on the part of the band as the melody of this particular tune, originally that of ‘The Moreen,’ one of the oldest of all known Irish folk tunes, is so beautiful you wouldn’t want an overanxious beat to take away from it.

Irish rebel song ‘God Save Ireland’ is a patriotic and patriotic sounding affair with a melody and tune that has been used in many an Irish and Scottish folk song.
The flute and backing vocal work is particularly impressive on this song and it nicely segues into the all time greatest album closer and one of the greatest songs in the history of all Irish music, ‘The Parting Glass.’ And a beautiful and moving rendition it is that exists on Last Order.

If you have even a rudimentary knowledge of Celtic music, and I’m guessing, considering you’re reading this now, you do, then you’ll won’t really find anything you haven’t heard before on this album. That said, if you’re looking for a great album of some of the best traditional Irish songs, delivered with punk speed and attitude and grand musicianship, Last Order will serve you well.

if you’re looking for a great album of some of the best traditional Irish songs, delivered with punk speed and attitude and grand musicianship, Last Order will serve you well.