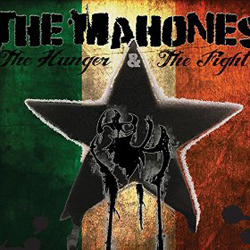 If memory serves me right, it was in April 2013 from our interview with Finny and Katie, when the news broke that The Mahones had been planning a new album. It would then be eight months later before we got any new information on what would be known as. The Hunger and the Fight.

Along with a non-finalize track listing and some concept art, The Mahones announced that The Hunger and The Fight would be a double disc concept album. Part one, which I’ll be reviewing today, has more mellow Irish folk style, with a hint of punk thrown into the mix. The album focuses on the hardships that the Irish faced, and how they overcame those struggles.

The album opens up with Brian Boru’s March. Growing up, I was always fond of The Chieftains version, and was happy to hear it as an opener. It sets the tone perfectly for the concept by starting off with a loan fiddle, and eventually picking up the tempo with a rock sound. Sort of like how part one is focused more on the folk side, while part two is said to be more about the punk rock.

The title track, The Hunger and the Fight, is a duet with Canadian rock singer Tara Slone of Joydrop. It’s an inspirational mellow track about staying focused and being motivated. I think it’s one of those songs that people will take what they want from it, as the message can be applied to nearly anything. Finny sounds great as always on slow tracks, and Tara carries her half exceptionally.

The third track , Paddy on the Railway is a traditional Irish folk song circa 1850. It’s often been preformed as a sea shanty, but The Mahones take on the Ewan MacColl version. The track also features The Tossers front man Tony Duggins. Adding Tony Duggins to any track means I’ll probably enjoy it, because in my opinion, along with Finny, and Mike McColgan, Tony has one of the best voices in the Celtic Punk scene. Finny and Tony both sing with a lot of passion and feed off each other nicely.

Stars (Oscar Wilde) is about the struggles of one of Irelands greatest writers, Oscar Wild. The track features Simon Townshend (The Who) on vocals. Simon is just an incredible musician. He’s the kind of artist that has forgotten more about music than what people like me will ever know.

I love a song that has great storytelling, and that is exactly what Prisoner 1082 is. Finny’s uncle, Donal ‘Danny’ Donnelly, was imprisoned by the British Army and thrown in jail at Crumlin Road Prison in Belfast. He was also the only man to ever escape the prison, which is known as Europe’s Alcatraz. It’s a catchy, upbeat, and inspiring song about saying “hell no.”

Pint of Plain (A Drop of the Pure) is a drinking song about not drinking, or rather alcohol addiction. Now, for the most part I like drinking songs because they’re usually uplifting and really good to sing along with. I understand they are meant to be fun songs and not to be taken too seriously, but I could never really relate to them since I’ve basically been straight edge my whole life.

The song is like a breath of fresh air, especially considering this genre is filled to the brim with songs about alcohol, but not enough about alcoholism, or drinking chocolate milk. I love The Mahones take on issue, and I think its fantastic that they can make a drinking song without using the same generic clichés.

The album has two bonus tracks that are both covers. First, Van Morrisson / Them I Can Only Give You Everything, which stays true to the original sound. Finally, the last track is a cover of Rancids Last One To Die, which will also be featured on the upcoming tribute album, Hooligans United.

The Hunger and the Fight Part 1 made me feel nostalgic for “Here Comes Lucky.” Which ranks right up there with one of my favorite Mahones albums ever. Overall, it seems like they shifted to a more easy, melodic sound than the previous releases, which brings me to my next point.

One of the most brilliant things about this album, is the fact that the sound itself shifts from Irish folk in part one, to Irish punk in part two. Lyrically, part one tells about the perseverance of the Irish, and part two will focus on Irish immigrants in America, and how they played a major role in making it the country that it is today.

Once again The Mahones add another fantastic album to their excellent body of work. Not only is The Hunger and the Fight the best concept album in Celtic Punk, it’s one of the best, and most creative in punk rock.

The best concept album in Celtic Punk to date.