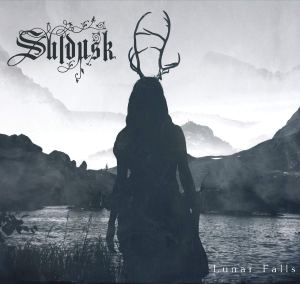 Hailing from Australia, Suldusk (the project from Emily Highfield) has released her long-awaited debut album, blending post-black metal, experimental soundscapes, neo-folk, and other groundbreaking influences into one package.

This studio effort is titled “Lunar Falls,” and one of the most striking features about this release is definitely the fact that the songs on the album are very atmospheric, yet focused and hard-hitting.

Through the span of 10 studio tracks, the Aussie artist is able to recreate many atmospheres, giving each track a unique sonic signature, while also endowing the album with a consistent and uniform tone.
The stunning acoustic guitar tones of “Solus Ipse,” the first full-fledged song on the album followed a cinematic intro (Eleos), has a sound that makes me think of bands like Anathema and Wolves in the Throne Room, where varied arrangements blend in with beautiful textures and lush, synth-driven sonic carpets. The vocals are incredibly textural, ranging from whisper-like growl to black metal screams and even melodic enables, reminiscent of Celtic folk music.

One of my personal favorite tracks on this entire release is a stunning song titled “Catacombs.” It begins with a catchy riff, and the vocal melody takes the track to a different place, with emotional lyrics and cool echo effects. The song takes on a different format, with the addition of the full band. I love the emotional cello tones, as well as the tremolo guitar chords, which bring a lot of space to the mix. The drums are simple, yet effective, giving the track a dream-like, floating vibe.

Aphasia is also worth a special mention. This song leans heavily towards the folkier side of the things, tipping the hat off to Americana, but retaining the group’s signature cinematic tone and huge sound. When the metal and rock influences creep in, this track becomes particularly unique – the perfect combination between a black metal tune and a rock ballad!

These are only some of the highlights on this album: Suldusk has a lot to offer, and it’s obvious a lot of hard work went in to make a hugely positive impression from the get-go, with a killer debut album.

Find out more about Suldusk and do not miss out on “Lunar Falls” and other releases from this talented artist.

A diverse album, which combines different creative influences in order to create a melodic, yet eerie and haunting sound.