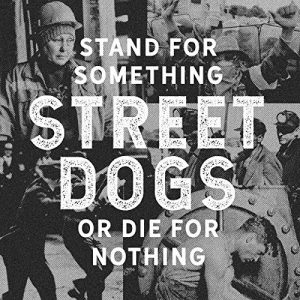 “Stand for Something or Die For Nothing,” has been one of my anticipated releases for 2018. It was four years ago when we got the EP split with Noi!se (which gave us that amazing Johnny Come Lately cover) and it’s been eight years since Street Dogs last full studio release. So needless to say, the hype levels went through the roof when this title was announced.

The sound of this record blurs the lines between classic punk melodies and gritty hardcore energy, somewhere in between Rancid and with some very subtle shades of Dropkick Murphys.

The album is what we’ve come to expect and love from Street Dogs. It doesn’t reinvent the wheel, for lack of a better expression, and the guys certainly know how to create catchy songs, performed with personality and great production. The sound hits the mark, bringing back the staples of the genre. Loud, creamy guitars with a maxed-out tube amp feel, steady drums and melodic vocals that have a lot of energy.

Street Dogs have managed to build a steady and dedicated following due to the honesty and simplicity of their music. This album certainly serves as another chapter of the band’s excellent legacy, and their work certainly is certainly much welcome.

The band’s acclaimed self titled album was recorded at the semi-legendary Blasting Room studio, which is home to some of the best punk rock and hardcore albums of the past decade or so. This time around, the band opted to self-produce this release, with band member Johnny Rioux himself taking control of the production process. The results are definitely outstanding, and they stay true to the band’s spirit, and more importantly, to the songs.

In addition to the bands trademark street punk aesthetics, the band introduced some new elements into their sound in this particular album. There is definitely a retro twist, which blinks an eye to bands such as Social Distortion or Roger Miret and The Disasters, which are quite known for blending their punk roots with genres such as classic rock and early rock’n’roll.

As a result, there is a charming retro sheen that binds the album together, creating an interesting combination of old school energy and modern punk rock tones.

Mmhmm: An Interview With Hannah Fairlight And Raelyn Nelson