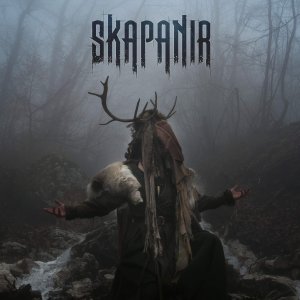 Danheim is a Nordic folk/Viking inspired project from the Copenhagen-based Danish producer Mike Olsen; who has completed the not so small task of releasing his eighth studio album titled “Skapanir” on March 20th 2020. His music is often composed of ideas and stories based on the darker side of the Viking period, inspired or consisting of Nordic Mythology, old Danish folklore, and a vivid imagination. This creates an evocative sound world with trance-like drumming patterns, simple melodies, and a multitude of different electronic and organic sounds, all mixed together with modern production qualities and techniques that adds to the composition. You may be familiar with the popular TV show Vikings which has featured some of Danheims music.

The music is a mixture of many traditional and unusual instruments, a variety of drums and percussion, combined with wind and rain sounds, vocal growling, chants, bird calls, and howling wolves, all creating a very rustic primal energy. A sound world which is then combined with some modern synths, drones, reverb, and other production techniques that alter and change the sound that creates the multidimensional viking sound bath that is Danheim.

Olsens background in electronic music and production comes through in the structure of the songs, which are similar to some electronic music where there is a constant pulse or drum pattern that occasionally drops out and other patterns, drones, cyclical melodies, will emerge.

The production is used in the composition of the songs, as frequencies are gradually filtered out and then brought back to push the sound into the background and then bring it into the foreground again. All the elements are easily digestible when you are activly listening. However the songs are felt very strongly on an internal rhythmic level, and evoke strong images of a warring viking tribe.

Kala begins with some soundscape and a brief melodic motif. The piece is structured around a drum cycle, with changing instrumentation and bringing in new drone-like textures and sounds in each cycle. Blotjarl makes use of a combination of rain sounds, ambient synths, traditional instruments, shakers and some other odd unusual sounds. As the drone textures are almost constant they change slowly over time highlighting certain instruments or melodies.

Forndagr, in particular, has cool drumming patterns, and with all of the wind and nature sounds, you begin to feel like you are in the wild. Faldne begins with a shaker that pans from left to right, followed by layered polyrhythms of percussion drums shakers, then a stringed instrument enters playing a phrygian based melody. Many of the melodies are short and melodic, often modal. The melody drops out and then returns with different layered patterns and sounds.

Reida is easily my favorite track on the album. It begins with heavily distorted growling vocals, gruff chanting, anvil strikes, electronic loops synths with heavy reverb. This is the most gritty the album gets and I think it works very well. Towards the end of the song some vocals enter with some effects that make it sound robotic which is cool in a weird way. It never feels out of place because of the modern production and synths throughout.

This album from beginning to end is evocative of everything primal and Viking. As fans of folklore and Norse mythology will certainly appreciate all of the references and use of traditional instruments. The modern production makes the composition even more visceral, cinematic, and hypnotic. If Viking music intrigues you even a little, by the time you finish listening to Skapanir the primal rhythms will have penetrated your soul and you will be compelled to follow those ancient Norse traditions. In my opinion, Skapnir is a great release and yet another fine addition to Danheims body of consistent and amazing work.