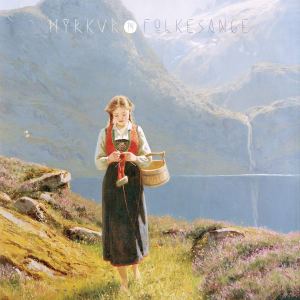 This album is a change in direction from Bruun’s previous two albums which had a strong black metal influence. Folkesange is heavily inspired by traditional folk music. Which makes it quite different from previous albums in that there is no guitar or distortion of any kind on the whole record.

It is still very much Myrkur’s writing style though, and the music is not dull or tamed because it is “folky”. Rather, the music is still ambient, dark, and cinematic. But it also appears as tribal with rhythmic drumming at some times and also delicate and longing with simple melodies and delicate string, piano accompaniment at others. Bruun also makes use of some traditional singing styles including “Kulning,” a traditional Scandinavian herding call.

As well as using some traditional instruments including nyckelharpa, lyre, and mandola, which add to the feeling of it being connected to an older tradition. But this is not a documentation style recording as it has all the quality and feel of her previous albums having slick modern production and lots of reverb.

The first track on the album, Ella, Brunn details as:

The result of years of studying, playing and listening to traditional Nordic folk music. This is my version of a new folk song, with roots planted in history and in the past. It is my ode to mankind and our connection with nature — a rite of passage as a woman and a rebirth ritual in the sea.

She continues: “Three years ago I decided to share a video where I performed an old Scandinavian folk song on the nyckelharpa. After this, I realized that I had a strong need to create an album within this universe and that other people also wished to hear this. So I started working on picking out what old songs to reinterpret as well as write my own version of this.

All the years of study and practice have paid off on this record as the folk elements are seamlessly integrated into her artistic expression.

The first track “Ella” is in a minor key and begins with a simple unaccompanied vocal melody. Then as the song progresses drums, strings, and other instruments enter and begin to add more layers to the texture of the song. Then vocal harmonies are added filling out the chords, which adds some change and development to the song as the same melody continues throughout.

This song follows a traditional song form structure for the most part where a single melody is repeated with changing words. Except Bruun changes up the predictability a bit with instrumental breaks and changes in instrumentation. Which is done successfully making for a well-crafted composition based on the traditional song.

This style of craft and care in the compositions can be seen throughout most of the album, as most of the songs are either built upon a traditional folk song and then expanded or inspired by one. The next song “Fager son em ros” starts off with layered drums and percussion giving a really driving rhythmic feeling that has a cool groove. Which has a real primal and earthy feeling, that makes me imagine a tribal dance of some kind.

The song is in harmonic minor and is quite lively and easy to get into. This song is one of my favorites on the album because of all the rhythmic elements despite it being quite short at just under three minutes.

Leaves of Yggdrasil is sung in English as opposed to most of the other songs on the album, this one sounds like a lullaby as it is very melodic and with a simple 2 note pattern played on the piano. It has a feeling of being lulled to sleep, with repetitive simple patterns.

“Tor I hellheim” starts with a kulning call, a traditional nordic folk singing style that was used to call the herds of animals. There are other places on the album where this style of singing is used as well but it is prominently featured on its own in this track as it opens with just the vocals. The song progresses with simple accompaniment and repetitive drums.

The track Svea is an interesting song because it appears to be modal and shifts somewhere between major and minor keys within the melody. It never seems to truly rest in any key center. it’s another 3min short tune, and never seems to feel quite at home as it moves freely through major and minor.

As the album progresses there are more mixed lullaby songs and tribal dances with driving rhythms, String drones, and haunting melodies. Saturated in a healthy amount of reverb and fine studio production.

“House carpenter” the ninth track on the album is an old ballad also known as “The Daemon Lover” in some versions. This is the solemn tale of heartbreak and long lost love which is a common theme for many old folk songs. There are many versions and renditions of this ballad but in this particular version, a woman forsakes her husband, the house carpenter, and her child, for a former lover. The vocals are sung with exceptional skill in a way that feels organic with the music, Bruun has truly made these songs her own.

The last song on the album “Vinter” has an intimate mood with a somewhat romantic piano feel to it with major and minor 7th arpeggios flourishes and very intimate vocals. It begins with a piano creating a sonic sound world for the voice to emerge and sing this intimate melody sung on ooh’s and ah’s.

Then it modulates to a lydian sound world which feels very much like a lullaby which builds by adding vocal harmonies then returns to the first sound palate. Returning home, then it ends with piano playing some more free phrases with rubato. You can hear the pedals of the piano being worked in the recording which gives you the feeling like you are in the room with the pianist while they are playing and adds to the intimacy and delicacy of the sound.

I think it is a very good album. It is difficult to recreate and reinterpret folk songs because they have been around so long and there have already been so many different versions of these songs recorded. And as the stories change and different versions emerge over time so do different musical interpretations and Myrkur adds to this tradition in a way that is very successful and authentic to her own musical intuition.

Myrkur adds to nordic folk tradition in a way that is very successful and authentic to her own musical intuition.