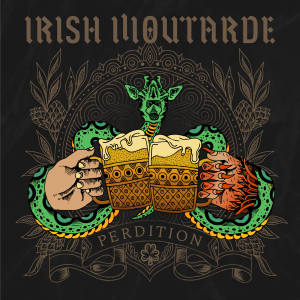 Irish Moutarde might easily be one of the most unique Celtic punk bands you’re likely to hear. Their sound is exactly the kind of Celtic punk rock that you would expect: there are edgy guitar riffs, pounding rhythms and energetic singing, along with the classic sound of folk instruments such as bagpipes and banjos.

However, there is also something extra, not commonly found in the work of many bands pursuing the same genre. Irish Moutarde actually sing in French and English, reflecting their own culture (the group is from Quebec City, Canada) as well as their passion for classic punk rock and Celtic music. The fact that the band has songs in both languages is actually really intriguing, because it enhances their formula with yet another dimension that makes them all the more unique. Their brand new studio release, “Perdition,” is certainly a fantastic showcase of their talent, with half the songs being in French, the other half in English.

This record is following a tough act, as they say: the group’s 2013 debut album, “Raise ‘Em All” was incredibly well-received, and it was even considered the best album of the year by many critics and music fans alike. I had the pleasure of being one of those reviewers for Raise’Em All, and to this day, that album is still in my main playlist.

Naturally, there is a lot of trepidation when it comes to follow up really great records, and there is a lot at stake. On the other hand, Irish Moutarde definitely played the “cool” card and waited a few years before hitting the studio with new material. Instead of rushing into the process of writing, recording and assembling a new album as quickly as possible to cash in on the success of their debut, they decided to go the patient route. They took the time to perform extensively, further honing their already excellent skills and chemistry as a band.

As a result, this new album really depicts a band of passionate musicians who know exactly what they are doing, and what they want to achieve with their sound. All in all, this is a great Celtic punk album with a flavor of its own: don’t let it slip through your fingers, and go pick this one up!