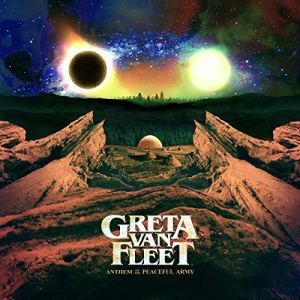 Greta Van Fleet may be a young bunch, but they have already managed to garner global recognition for their uncompromising blend of rock and roll music. Their style is a blend of classic 70s vibes, 60s proto-rock and pre-grunge hard rock, which is all about monolithic guitar riffs, vintage aesthetics, and on top of it all, great hooks with a memorable feel. Recently, they finally wrapped up their long-awaited and highly anticipated debut release, Anthem of The Peaceful Army.

The album showcases a really tasteful approach to production, which really makes me think of modern retro-inspired bands such as Jet, Wolfmother or Airbourne, only to mention a few. However, the band recorded this album in Nashville, and you can definitely hear that influence, especially on some of the most mellow songs on the album. The end result is striking because this release combines the grit you would expect from the genre, with much more clarity and articulation

The record features 10 songs, which stretch the band’s vision towards different directions, while maintaining a very cohesive sound. The opening track “Age of Man” has a really gripping intro, with a Mellotron-like sound that adds to the atmosphere of the track. However, the initial otherworldly textures are soon replaced by an upbeat blend of rock music, which immediately echo back to the glory days of 70s stadium rock. The Who immediately spring to mind.

The second song, “The Cold Wind” continues on the thread of classic rock, with fun melodies and great Bonhamesque drumming. “When The Curtain Falls” is also all about anthemic stadium rock vibes on steroid, injecting massive doses of youthfulness and energy into the band’s sound and vision. “Watching Over” is a slower “power ballad” with a timeless feel.

The fifth track on the album, “Lover, Leaver (Taker, Believer) continues the trend of hard rocking fun, with chunky riffs that have a classic feel. The catchy hooks and unique vocals make me think of influential acts such as Free. “You’re The One” follows right up and is a very positive rock song, with a more mellow tempo and a nice romantic edge to it.

“The New Day” might very well be one of the catchiest songs on the release, blinking an eye to pop music in a very subtle way. Imagine if Guns & Roses, took one of their most mellow tunes and made it even catchier, that’s kinda what we’re treated with for this amazing track. “The New Day” brings back the uncompromising spirit of rock and roll, with infectious slide-guitar riffs, and massive blues/rock appointments.

The next-to-last track on this release, “Brand New World” echoes the title of Aldous Huxley’s famed dystopian novel, and it also stands out as one of the band’s most ambitious tracks. Clocking in at nearly 5 minutes, the song has a tone that feels almost  progressive in nature, experimenting with more aggressive chords and darkest sonic landscapes.

Last, but definitely not least, “Anthem” is another example of Greta Van Fleet experimenting with pop-centric sounds, as the title of this song might imply. This track has a bit of a country / southern rock vibe, but it also has a nice happy-go-lucky tone, that ends this album on a very cheerful note (no pun intended.)

Ultimately, this album has a really unique feel, and it is almost as if I went to a really cool record shop and started diving through the boxes to discover some hidden 70s rock gem. In spite of its obvious retro references, “Anthem of the Peaceful Army” also holds a lot of character, and it has a distinctive personality of its own.