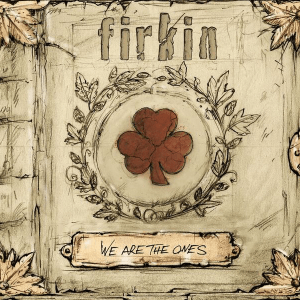 Firkin might be a familiar name to you if you are a fan of Celtic Punk music. This talented band has just released an exciting new album titled “ We are the Ones”, an outstanding new chapter in their musical journey.

Hailing from Hungary, this Celtic Punk collective is well-known for their signature energy and intricate arrangement, setting the bar higher in terms of musical innovation. On “We are the Ones”, the group set out to feature includes a mix of original songs and unique and innovative cover tracks, in which the band explored some fan-favorites with a whole new, well done twist.

What makes Firkin stand out in the industry today, is that they are able to seamlessly bridge the gaps between modern rock and traditional Celtic folk, not only by adding a few folky elements to a predominantly tock song, but writing arrangements based on the combination of both worlds. Covers are usually something we get on Celtic punk albums, and for the most part they’re done quite well. However, Firkin excels in taking those songs and making them their own. Probably one of the best bands out there for giving covers their own personal twist

“We are the Ones” is filled with expressive melodies, high energy, and huge dynamics, which are hard to come by these days, even in this genre. The band’s original songs stand out as distinctive and vibrant compositions with an infectious lyrical flow, a lively spirit, and an eclectic range.

The first song on the album, “All Is Well”, is edgy, gritty, and fast paced – a perfect introduction to this collection of tracks. “Your Odyssey” is one of my favorite tracks on the entire record. It breaks up the album nicely, with a bit of a different vibe. Firkin expertly managed to bring a lot of variety to this particular album, making for a roller coaster of a listening experience – Like a night out at a pub with lots of people – some are dancing, some are brawling, some are just sitting there drinking, some make out with their dames…the scenery is interesting and full of details, and you just can’t get away until it’s closing time!

Steve Earle’s “Galway Girl”, is an example of one of those incredibly well done covers from the band. It’s also the new “Wild Rover” in terms of covers, which even Ed Sheeran is getting in on the action. Except, in his version he forgot the correct lyrics, melodies, and everything about the song that makes it not suck. This track is a perfect example of Frikin adding their own very minor personal twist. For example, in this version, her hair is purple. ( must be one of Those Irish Punk Girls)

It’s those little nuances I think are great. However, I do have one complaint. And that is the changing of the line “of a day-I-ay-I-ay” to “hey hey hey hey hey.” It’s not that I think it’s a bad change, I actually prefer Firkins version of this line. Puirt à beul lyrics usually end up in a train wreck from large crowds in a sing-along song anyway, so I do think the “hey” is much better. The only problem is, every time I hear it, I think of Fat Albert.

To finish of the album “Flowers” is a more introspective and well-rounded offering from the band, with a great collaboration with fellow artist Agi Szaloki, who contributed to the personality of this track. These are only some of the many highlights on this amazing release. “We Are The Ones” is a very accomplish record, and you will enjoy whether you are a discerning Celtic Punk fan, or a casual music listener looking for something new and fun!

Cellar Darling At On The Rox In Dublin Ireland