Verdun, France, 1917. Hartwall Arena, Finland, 2019. This is where Sabaton chose to start their “Great Tour”, to promote their latest album, “The Great War”. Lots of greatness was indeed to be had on that evening.

The first thing you need to know going into a Sabaton concert is: expect fire. And explosions. Possibly gasoline. Also some smoke, throw in a few machine guns as well, and of course, a tank. This time around, there was also a Red Baron triplane organ. And lets not also forgot; one of the most energetic Scandinavian bands of modern times.

To warm-up the huge ice-rink (yes, Helsinki’s main arena is an ice-rink, stereotypes are true), the “Swedish war machine” has chosen Amaranthe. Their electro-metal is exactly what you need when you get in. Catchy, dance-y and heavy. The 3 voices of their singers (a co-lead with female vocals, clean male vocals, and male death growls) mix on all the tracks, from some of their best known works such as The Nexus, to newer stuff from their latest release Helix, (which was one of Folk N Metals picks for best albums of 2018). Elize’s dress is shiny and bright and the band really weaves their musicianship around her amazing vocal performance.

Up next is Apocalyptica. The local band, so to speak. But do they really need an introduction? The amazing cellist are on their turf and are rocking strong with over 20 years of stage experience. From “Plays Metallica By Four Cellos” to “Shadowmaker”, they revisit their whole discography. No singer? No problem. And there isn’t a single drummer who could compete with Mikko Sirén and his amazing drumkit featuring weirdly shaped things and, yes, tin cans. 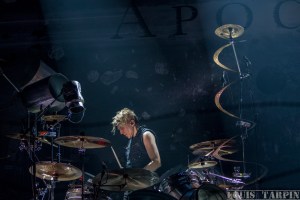 After a few songs, Elize Ryd comes back to stage, in a new dress, to help the guys sing what they can’t sing and motivate the whole audience on “Nothing Else Matters”. The fans sing along and it is amazing. As if they had heard that little-known song. She sings a few more tracks before disappearing and leaving the boys to their games. They are at home, they’re friends, they don’t know the word “pressure”, and they are enjoying this moment, playing among themselves and with the audience, starting songs just to switch to a different one, having the whole crowd mouth The Hall Of The Mountain King, and even flossing. Yes, flossing. Oh, and playing cello with their teeth. And swinging cellos up in the air. And playing upside down.

Cue another 30 minutes for changing the stage set. Time to change the battery of the camera and add a new SD card. These little things fill up quickly, when you get a thousand shots per hour.

And then the war began.

Ghost Division has been their intro since forever, and it never fails to do its thing. It takes approximately all of two seconds to get everyone jumping up and down. From the start they make it clear that their show is going to be full of fire and explosions, because the war is on, baby. They’ve got a tank on stage. They’ve got trenches on the sides. They’ve got flamethrowers everywhere. They’ve got sandbags and barbed wire on the front of the stage. They’ve got crew dressed as war mechanics. And they’ve got one of the best metal albums of 2019.

Song after song it’s the same display of energy. You expect a ballad? HA. No mid-tempo here, just heavy metal, powerful as… well. As fighting, I guess. And in between songs there’s always time for Joakim to talk to the audience and joke with them (or compliment them).

On The Attack Of The Dead Men, guess who found the costume of a WWI gas soldier, complete with mask and smoking gun? That’s right. Joakim. But impossible to know whether he had his sunglasses underneath the gas mask.

Talvisota (Winter war, in Finnish) get its own intro, in Finnish, with additional comments on “you don’t fuck with the Finns”. That’s right. And that’s why The stage is covered in snow for the whole song. Talk about a Christmas party. And for Carolus Rex the boys brought out guitars with the lion and crowns of the Swedish flag. How that did not start a civil war in the arena of Finland’s ice hockey team, who won the world championship against Sweden, I don’t know.

Remember their old joke about the band wanting to play Swedish Pagans and Joakim not? Yeah, here too they do it. But don’t worry, they do play it. Eventually. But not before bringing out a mini-triplane/Hammond organ for The Red Baron, probably one of the best, (in my opinion) pieces of “The Great War”.

Apocalyptica came back to the stage for a few songs, because, as they said, “we rehearsed one song together this summer, and then we decided that, what the hell, there’s no point in doing such a thing for only one song, right?”. Right. And so here you are, playing WWI and WWII songs, with 3 cellos, 2 guitar players, 1 drummer, a second drummer standing with a war drum, 1 bass player and the craziest jumpiest Swede ever.

All in all, and judging by the atmosphere in the train back to Helsinki center, the show did meet everyone’s expectations, and I would bet that half of the audience would have been ready to take arms against whoever, had Sabaton just asked for it. Don’t miss them on The Great Tour!