Nosturi is an underground club in Helsinki. That means it accomodates comfortably 900 people over two floors, with bars and sofas, and it has seen bands such as Motörhead or HIM. Yes, “Finnish small” isn’t exactly the same as “anywhere else small”. It’s also one of my favourite venues, for its location in the middle of the former industrial shipyard, cosiness, and friendliness of the staff.

In this end of August, it was The 69 Eyes‘ turn to walk the plank of the shipbuilding factory, with the assistance of National Nightmare to warm up the audience. Let’s start with them.

National Nightmare is a new band that started in 2016. But every member is a veteran of the classic and hard rock circuit in Finland. Self-described as having “one foot in the blues and constantly seeking new horizons of musical expression”, National Nightmare is exactly what you’d expect: that rock band which you hear live in pub on the side of the road once you have parked your Harley Davidson and are downing a few beers along with your friends.

Openly influenced by Guns’N’Roses, their style is not dissimilar, although they are rather of the “restrained Finnish” persuasion than “blazing out Los Angeles”. Sure, it’s not the most exuberant performance ever, but it does the job: warm up the crowd, make everyone feel welcome and rocking.

After a brief change of stage, The 69 Eyes is here, and ooh baby is it moist.

“Devils” is the great opening song that always work, displaying the skills of the band and definitely pleasing the ranks of the audience. “Never Say Die” is always good as well and everyone can join the chorus. But it’s really with “Perfect Skin” that the band finds its tempo and gets in touch with the spectators. How can one resist to the deep voice of Jyrki69 telling you to “shake your hips”?

Over 30 years of carreer, The 69 Eyes clearly has managed to forge itself a style and their presence on stage is meticulously executed, with the ease of those who have spent their life playing live music and will keep doing so.

When the concert ends, after “Brandon Lee”, and everyone go home, more than one certainly left the venue dreaming of leather jackets, black sunglasses, buzzing guitars and deep rumbling vocals. 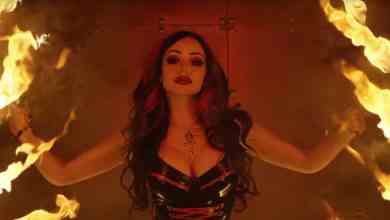