On September 19, the “Metal Tour Of The Year” rolled into Clarkston, Michigan, taking over the entirety of the second day of Riff Fest 2021. As with many tours that were seeing now, this one had been postponed due to the ongoing worldwide situation with the Covid-19 pandemic.

The tour has been one of the most talked-about this year, as we see the return of Megadeth’s frontman, Dave Mustaine to the stage after his battle with throat cancer.

Following some earlier performances by Hatebreed and Trivium, Lamb of God took to the stage and played some of the songs off their self-titled album, which was released last year. Kicking it off with Memento Mori, they soon followed up with some of those classic crowd-pleasers from their rich discography. Randall Blythe gave an electrifying performance filled for the roughly hour-long set. High energy, stunning pyrotechnics, and the atmosphere of the crowd always make a Lamb of God show a unique experience.

Finally, as a full moon set upon the DTE Energy Music Theatre, Megadeth took to the stage and gave motor city metalheads the show of a lifetime. Megadeth brings a different kind of energy and presence than say a band like ‘Lamb of God”. It’s quite difficult to explain and something extraordinary that you need to witness and experience in person. The showmanship and stage presence of a legend like Mustaine is still an inspiration for both veteran and up-and-coming rock acts. The band wrapped up the show with ‘Symphony of Destruction’, and a few encores as some extra good night tunes for the fans.

There are still a few more tour dates in the US, and the bands will finally wrap up for several shows in Canada in early October. You can find more information on ticket availabilities via the band’s websites. 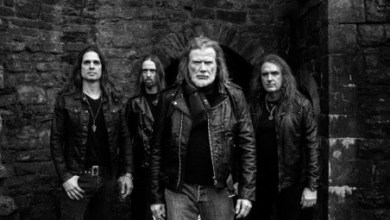