“The savage beast from the north,” Ye Banished Privateers, will be returning soon with their enthralling fourth studio album ‘Hostis Humani Generis,’ out February 7, 2020 via Napalm Records. The the band’s new full-length album features sing-along hymns, folk tunes, and more. Swedish marauders of the sea will take us through the ups and downs of a Pirates life.

The bands atmospheric and sinister first single, “No Prey, No Pay”, conveys the spirit of what it means to be a pirate and catapults you back in time – right into the 18th century of the hazardous world of YE BANISHED PRIVATEERS. Listen to the Freebooters first single and breathe in the salty air of the sea.

By the grace of God and King George’s arse! We are releasing a new video, and our next album is officially on the way! “No Prey, No Pay” sets the stage for the album and describes how times suddenly had become more difficult for those sailing under the black flag. More than ever, piracy had become a hazardous task, many times with the sole purpose of getting enough value to guarantee a decent meal for a couple of days.”

Pre-orders for the album are now available. 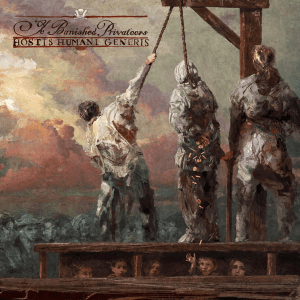 “It is with great pride that we present to you our fourth full length album – Hostis Humani Generis! Over the course of 13 songs (well, 15 if you get the deluxe box) we tell the immersive story of a delinquent pirate crew, the downfall of the pirate republic of Nassau, and the end of the Golden Age of Piracy. We are immensely happy that the time has finally come to share this with you all, and we really hope you like it as much as we do!”