Today we bring you the premiere of the latest single and video from Denver Colorado-based pop-rock trio, The BRKN. The appropriately titled track “Lovers,” in the month in which Valentine’s day falls, is now available on all digital platforms. The track is a gradual groove featuring an alluring piano, along with a melodious charm.

This time around, the band has evolved their sound a bit by going in a more pop rock direction instead of a pop punk style which was featured on their debut release No. 3. Here’s what the group had to say about the new infectious sound and single.

“I couldn’t be happier with this one, I’m interested to see how people will take to this different direction and I can’t wait to play it live, I’ve always wanted a piano ballad,” says Cade. “I’m so excited for people to hear this song. It’s a very different sound for us, and I’m so proud of the way it turned out,” adds Bokenkamp.

“Lovers came together as a song out of left field; the shuffle, the tempo, the emotionally bare lyrics, nothing about this song really made sense for us as a band initially. Jacob wrote the vibey chords on an electric piano and Mike showcased his wild versatility on the drums giving “Lovers” a vintage feel while remaining upbeat.

Once we started down the road of a more traditional sounding love song/lament type shuffle, there was no going back, and we pressed into it fully. With some of the guitar parts, Jacob and I worked to capture a familiar sense of melancholy hopefulness that pervades the ending of any relationship. Everybody has been through a relationship ending and everybody has felt that foolish hope that things might work out again.

Lovers is a song for the people stuck in those initial stages of fresh loneliness: a reminder that it gets better with time as you realize that you’re better off having experienced growth than sinking back into something that sucks the life out of you. We all pulled from our own past experiences of heartbreak and loneliness to give this song a little something extra. The final product turned out to be (collectively) one of our favorite songs we’ve written as a band,” explains Younkers. 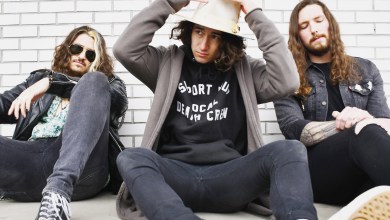 Exclusive: Check Out The New Single And Video From The BRKN – ‘The Motions’