Sons of Silver have returned with one of the most aggressive, and riff-infused tracks to date, “Hesitate.” The song is a preview of what’s coming from the band’s sophomore EP release, “Ordinary Sex Appeal”. The track hinges on a hulking hard rock groove before leaning into the crunch of a palm-muted riff. You can stream the track now at this link.

“Like many of our songs, Hesitate came about during a band writing session. It was the summer of 2020. We’d recently returned to the studio after not seeing each other since the pandemic began. All of us were both relieved and unnerved. Relieved to get back to work and unnerved as in, WTF is going on! Considering the circumstances of the pandemic at that time, we didn’t know how comfortable we’d be working closely in our somewhat small recording studio. But the uneasiness lasted all of 30 seconds. Once we got going, the work was carefree, cathartic and rejuvenating. New ideas poured out immediately and we chased them down throughout the fall of 2020.”

“One particular day in August, we were trying to find ‘the missing piece’ for an incomplete song. I don’t remember anything about that song, now. But I do remember a lot of dead-end ideas. We were kind of done for the day when, suddenly, we found ourselves in the middle of a collective burst of energy. A last gasp that had nothing to do with what we’d been working on all day and everything to do with what we’d been feeling for months. It was a moment of inspiration that became Hesitate. We captured all of our musical ideas and nearly all of the lyrics in about ten minutes.”

“Hesitate was scheduled for release weeks before the word made its way to the top of our current social lexicon. It has nothing to do with vaccines, vaccine mandates, proponents, or opponents. Or does it?” 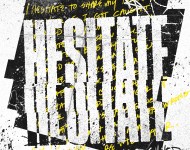 In the midst of the Global Pandemic, Sons of Silver unleashed the aptly titled Doomsday Noises to widespread critical acclaim. American Songwriter deemed the band a “Supergroup,” along with praise from Consequence of Sound and Paste Magazine to name a few. The songs from Doomsday Noises have amassed over 5 million views on YouTube and over 200k streams as they continue to gain traction at radio.

During the summer of 2020 the band started to write again. Armed with new music, they hit their studio together, as safely as possible. “The moment we got back into the studio after quarantine, we were like, ‘Why did we take so long to get back to this?’ It reconfirmed everything we love to do together. Making music gave us some sanity because the time was obviously really strange and somewhat depressing.”

Sons of Silver feed off this sort of face-to-face energy. A tried-and-true rock n’ roll band, they plug in and unlock a flood of emotions energized by unbridled guitars, fluid percussion, and a distinct vocal howl.