Today we bring you the worldwide premiere for “O’er My Sins Thou Sit and Moan”, the first single from Nakedyan. Nakedyan is a new project from Stefano Ferrian, an Italian musician/composer/producer.

This new project is an acoustic kaleidoscope where traditional folk, neofolk, world music, ambient, with influences from acts such as; Opeth, Katatonia, Lisa Gerrard.

Stefano spoke about the project saying:

It is the exercise of order, perpetrated through the nakedness of the spirit. After years dedicated to covering the suffering with chaos rubble with projects like Psychofagist and SYK, I felt the need to express a side of me that I kept hidden. Contact with nature was necessary, through the daily contemplation of the spirits that inhabit it. Since 5 years I have been fortunate to have left the city noise in favor of a withdrawn and silent life that has necessarily led me to have to make peace with my demons, under penalty of life. Having moved to the mountains of the pre-Alps was certainly fundamental to allow this new creature to emerge from the ashes of what I was. 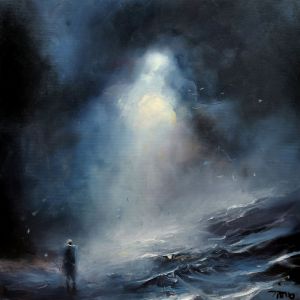 He has traveled a lot as a driver for other acts and did tour management for Billie Eilish on her 2017 European Tour.

To date, he has recorded 35 albums worth of personal projects and 11 as session or guest musician since 2002 for labels like Philip H Anselmo’s Housecore Records, Earache, NotTwo, Amirani, AltRock.