Jeremy Pinnell is releasing his final single, ‘Red Roses’, before the release of his new studio album, “Goodbye L.A.” The album will be drop on October 1st via SofaBurn Records.

On the track, Pinnell sings candidly about love and all the trials that come along with it. He spoke about eh track by saying:

“It’s not easy letting people know what you’re thinking and the realization that love isn’t about feelings. It’s complicated when writing a personal song like this without dragging anyone else into it but also important to be honest and then that bridges the gap between the art and the listener. People long for honesty and sincerity and the only way to do that is to be honest about your own situation.”

Jeremy Recently finished up a handful of dates as he did a tour around Texas in late August, a few shows in early September, and one more, which is scheduled for October 8th in Newport Kentucky at the Southgate House Revival, which will be the album release show.

You can grab a copy of the upcoming album at this link. 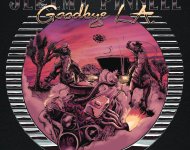 The collective sound of Goodbye L.A. isn’t so much polished-up as it is intentionally steered to fit Pinnell’s goal of making a fun record. “[Production-wise] I wanted like ‘80s Waylon, ZZ Top. My idea was that I wanted to write a record that made people happy,” he says. “I want people to dance and have fun and love each other.” A big part of getting the desired result was bringing in Jonathan Tyler to produce Goodbye L.A., the result hitting the desired mark dead-center. Rooted in his steady acoustic guitar, Pinnell’s songs are shot through with honest and classic elements. The rhythm section, all snap and shuffle, find purpose in well-worn paths. The pedal steel and Telecaster stingers arrive perfectly on cue, winking at Pinnell’s world-wise couplets. A slippery Hammond organ insinuates gospel into the conversation. Listeners can feel the room breathe and get a sense of these musicians eyeballing each other as their performances are committed to tape.

When Jeremy Pinnell released OH/KY in the summer of 2015 to stunned acclaim, it felt like an entire career compressed into one knock-out album. Hailed as “mind-blowingly good” (Greg Vandy/KEXP) and “hardscrabble honky-tonk at its best” (Rolling Stone), Pinnell’s debut immediately differentiated as authentic and unflinching. Dogged touring through Europe and the States and celebrated radio sessions followed, cementing Pinnell’s position as a no-fuss master of his craft.

His 2017 album, Ties of Blood and Affection presented a canny lateral move. Instead of doubling down on the stark themes and values of his debut, the sophomore album found Pinnell finding comfort in his own skin, achieving the redemption only hinted at in his previous batch of haunted songs. Pinnell’s newest album, Goodbye L.A., is set to release on October 1st.