Today we’re delighted to bring you the premiere of the second single from Austin-base singer Tony Kamel for his song “Heat”. The track is off Kamel’s debut solo album, ‘Back Down Home’, which is set to release on September 24 on The Next Waltz, which is the label of Texas legend Bruce Robison.

The song is based around inspired by a trip Tony went on, which was right into the heart of Cajun country, Lafayette, LA. With an area that is filled by rich food, culture, arts, and music, it’s unquestionably the type of place that would light a creative fire. From the horns, to the emotional, raw soulfulness in Tony’s voice, this track made you feel like you’ve taken a trip there yourself if you can handle the heat.

Tony spoke about the song by saying:

Take a trip to Lafayette, LA during the Blackpot Music Festival. Then go to The Blue Moon Saloon and try to two step with some locals. Hang out in that area for just a little while and you’ll see where this tune came from. They say TX is like its own country. Louisiana is more so, in my humble opinion. Good people, good times, killer music. It’s really one of the most unique (and most humid) places on earth.

Bruce had the idea of adding horns to a few tunes for this record. I wasn’t sold until they started in on this one. Then I was all about it. I was a bit concerned it stuck out too much but it was too much fun to leave off and fit with the ongoing Gulf Coast theme.

Pre-orders and pre-saves for the album is now up at the following link.

More On Back Down Home 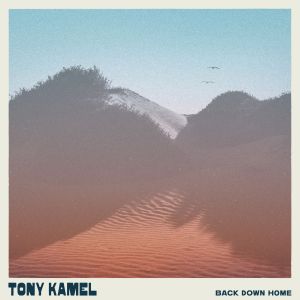 Back Down Home is inspired by the people and places of Kamel’s life, specifically in Galveston, TX–right on the Gulf Coast. He recorded the album in just a few days in Robison’s all-analog studio in Lockhard, TX. No computers–just Kamel, Robison, and several talented musicians who helped capture the album’s down-home vibe & laid-back nature. This record shows us a new side to Kamel–one that embraces a mix of Texas-imprinted country-folk, old-time and bluegrass styles to Louisiana’s singular stew of Cajun, jazz, and funk.

In conjunction with the release of Back Down Home, Kamel is creating an accompanying podcast that he calls his “thank you to the people and places that inspired the record.” Featuring interviews with Back Down Home’s cast and crew about making the album, as well as other artists and characters who dive into some of the deeper facets of the album’s subject matter—the Gulf Coast, going back to day jobs, overcoming sudden changes, and more.

“Home” takes on a twofold meaning: the place where we live and the place we’re from. For Tony Kamel, lead singer and guitarist of Grammy-nominated Austin band Wood & Wire, it also represents the place where his happiest memories were made. On Back Down Home, his debut solo album, he set out to express the significance of that place in his life — and why he still feels its magnetic pull.

“For any artist, a strong sense of place is all but required,” Kamel explains. “But Back Down Home represents that reliable, familiar place you can go for comfort, or to escape when
everything around you seems unfamiliar and unreliable.”

For Houston-born Kamel, it’s the Texas coast, especially Galveston. He’s got a mental scrapbook filled with special moments he experienced on the shores and waters of the port city once known as “the Ellis Island of the West.”

“This part of the Gulf Coast is a unique place, with a unique culture and people,” Kamel says. He and his wife spent a lot of time there in 2020, contemplating the arc of their lives together. That’s where he wrote several songs for the Sept. 24 release, the first full solo-artist album on renowned singer-songwriter and producer Bruce Robison’s the Next Waltz label.

In just a few days of no-fuss tracking at the Bunker, Robison’s all-analog studio in Lockhart, Texas, Kamel and several talented contributors crafted an album that fully conveys the down- home vibe its title suggests, as well as the laid-back nature of life on Texas’ Gulf Coast.

Kamel says that relaxed feel was easy to achieve partly because of the atmosphere at the Bunker, where Robison purposely avoided the usual, glass-separated studio setup in favor of an environment that’s more like your cool uncle’s throwback gameroom. There’s not a computer screen in sight, and if the vintage 2-inch reel-to-reel tape recorder happens to capture a bird’s well-timed chirp or a slightly imperfect note, that just adds character.

When Robison established the label and studio, he wanted to build an artist-friendly community with a go-to roster of players like the Wrecking Crew or the Swampers. He called in several for back Down Home, and Kamel added his choices. As soon as they connected, he says, “the
dynamic was perfect.”

Their rapport helps create a sense of cohesiveness among these 10 tracks, despite their wide stylistic range. As a whole, Back Down Home sits under Americana’s umbrella, but it might be best described as Third Coast roots music. And those roots just happen to grow in America’s
most fertile musical soil.

Kamel leads us through the region in a sonic travelogue that takes us from Texas-imprinted country-folk, old-time and bluegrass styles to Louisiana’s singular stew of Cajun, jazz, funk and other special ingredients.

His song titles suggest a loose theme — with occasional side excursions of the sort any wandering traveler (or soul-searcher) might make. We catch Kamel at a crossroads, bargaining with himself about growing up and admitting his fears about growing old (if only he could resist
both), but ultimately shrugging off time’s inevitable movement by embracing joy where he can.

The funky, honky-tonk gospel feel of the opening track and first single, “Amen,” sets the tone immediately, announcing that this is mood-lifting music — further elevated by backing vocals from Shinyribs’ Kevin Russell, Kelley Mickwee and Alice Spencer. And that distinctive percussion sound? Kamel’s pretty sure drummer/percussionist Josh Blue created it with a Yeti Cup.

Blue then sets the gentle “rhythmic vibes” of “Slow on the Gulf,” which Kamel wrote with his friend and fellow Gulf Coast native Bill Whitbeck (Robert Earl Keen’s longtime bassist). With Noah Jeffries’ mandolin, Geoff Queen’s steel and Mickwee’s harmonies, it sounds so much like
a back porch pickin’ party, you can almost taste a salty breeze.

“Johnny Law,” originally written (with his cousin, Milhko Bravo) for the soundtrack of the film Texas Cotton, is Kamel’s nod to traditional, old-school twang ‘n’ steel country, with lyrics from the villain’s perspective.

But “arresting” is the adjective that comes to mind for “Who am I Kidding?,” on which Kamel’s quietly contemplative tenor and lovely guitar playing give his confessions an intimacy that grows even deeper when Mickwee adds her harmonies. And Kamel knows he speaks for many of his
peers when he sings, I’ve picked and sang my way/Out of the nine to five/Is that a good thing or a bad thing/Some days I can’t decide/But I’ve quite enjoyed the ride.

Though Back Down Home is anything but a bluegrass album, the quick-time “Let It Slide,” Kamel says, “is a good representation of my bluegrass roots.” Jeffries, Whitbeck and Kamel even recorded it traditional-style, standing in a circle as they as they threw down their stringwork, augmented by harmonies from Robison and Wood & Wire bassist Dom Fisher.

In “Heat,” Kamel drenches us in a sticky Cajun/honky-tonk swamp-soul groove that somehow lures the ghost of Tony Joe White into a steamy Lafayette dance hall. With horns. “They say Texas is like its own country,” Kamel observes. “Louisiana is more so, in my humble opinion. Good people, good times, killer music.”

“The Surfer,” written about a real encounter, is a Cajun slow-waltz with sea-shanty lean, and a broad-voweled vocal delivery that reminds us how much Dylan learned from Hank Williams.

“This River” seems like a sparsely arranged tune at first, but its complexities lie under its surface. As Queen’s slide plays over a thumb-picked, low modal drone from Kamel’s guitar, they build a stepladder of sorts for Kamel’s voice as he weighs the privileges and sacrifices of making music for a living.

We get a peek into the actual roots of Kamel’s roots music with “Reuben’s Train,” part of a long tradition of American railroad songs that’s considered a bluegrass standard. “I cut my teeth on that song,” explains Kamel, who learned it from a fiddler at Austin’s Bluegrass Night, held each Monday for over 10 years now.

“I brought it in as a song that I thought we could just jam on to warm up,” Kamel adds, “and it ended up just being a cool take.” In true folk tradition, he combines lyrics of various versions and adds a few of his own. Then he breaks convention by throwing drums and electric guitar into the pickin’ circle. If purists don’t like it, oh well.

Kamel clearly respects tradition, but thankfully, feels no obligation to let it confine him. With this album, Kamel proves just how fluid every form of American roots music really is.

Which brings us to his final track, appropriately titled “Change” – written after the death of his father.  Here, Kamel sings it as an old-time Appalachian lament, the grief in his vocals mirrored by the sad sighs of Jeffries’ fiddle —which adds a little inflection of hope as Kamel, backed once again by the Shinyribs trio, sings, But the darkness won’t linger/And the light it shines strong/Change is coming on.

“I had a lot of fun making this album, and it turned out better than I could have hoped for,” Kamel says. “I had no experience doing things any other way than how I’ve done them with Wood & Wire. Hell, I hadn’t even really played with a drummer more than a few times in my career.” Remarkably, until Kamel joined that band in 2012, he’d never played professionally.

Actually, he’d barely played for anyone — not even family — until many years after he pulled his mother’s old classical guitar out of their attic when he was 12. Being a musical late bloomer still got Kamel to the Grammys (for Wood & Wire’s North of Despair). But Back Down Home started gestating even before that; Robison had been encouraging Kamel to record a solo album for at least four years. And now — just after the arrival of his first child — it’s here.