Bristol UK-based Indie folk newcomer Ben Auld is set to release his forthcoming debut LP, “Lemongrass’, just shortly after Valentine’s Day on February 15th, 2020, via Earth Libraries, which you can now pre-order. ‘Lemongrass’ is an album that is essentially driven by acoustic guitars. At the same time, it simultaneously pulls inspiration in the indie alt rock styles of Teenage Fanclub and the retro garage-style energy of Tony Molina.

Today we’re pleased to premiere the first single off the debut LP, D4A. the Song is a Mixture of mirthful folky acoustics and mellow vocals blended with bittersweet lyrics. Ben spoke about the warm and heartfelt track by saying:

This song is a folky jaunt. It’s pretty jolly sounding, which I think mostly comes from the high-strung guitar and quick pace. The narrative is a classic tale of infatuation, and I suppose this is just an earnest account of what that feels like while trying to avoid being too cringey or uninspired.

I guess that’s why I wanted it to sound quite merry. These sorts of feelings are intense and difficult to navigate in the moment but they’re kinda inconsequential in the grand scheme of things. I also like people being able to imprint a broad range of feelings or experiences on the music and making something happy-sad-personal-ambiguous is a good way to achieve that haha.

As with the other songs on the album, I wanted the song to sound dense and full despite the brevity. Most of the instruments are double or triple tracked and it somehow ended up creating these swells in the music which mimicked the different turns the lyrics take throughout. I spent a fair bit of time figuring out arrangements for the vocal harmonies on other songs but this was the first time it felt like they came together naturally which was cool. 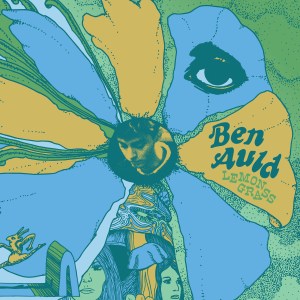 Ben Auld writes songs whose heartbreak and wonder reveal themselves moments after the warmth of their beauty sinks in, like slipping into the ocean on a bronzy morning. Whether he’s singing about bookstores and porches or ghosts and space stations, the Bristol, UK-based singer-songwriter imbues his straight-to-tape gems with a radiant AM pop warmth. And on Lemongrass, due 02/15/2022 via Earth Libraries, that comfy songwriting crackles and pops somewhere between Roger McGuinn and Gram Parsons. Auld’s debut record brims with homespun charm, dazzling melodies, and lyrics that burrow deep into the heart. 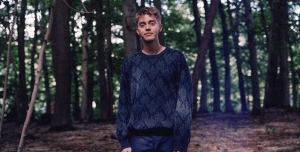 Composed of sessions captured at his apartment, his parents’ home in Norwich, and the delightfully cozy Canyon Sound Studio, the record shows no sign of patchworking, instead unified effortlessly via the songwriter’s beguiling presence. A self-taught musician, engineer, and producer, Auld carved the layered tracks out over four years, writing and rewriting, teaching himself drums, and developing new recording techniques. “I gigged around in bands for a while, but this record came together after I started getting dragged along to open mics after University,” Auld explains.

The first song born from those solo experiences was “Lemongrass,” a short melancholic title track that rolls through memories on a river of picked acoustic guitar, a faint tinkle of piano like cloud formations in the background. “Lemongrass in your hair/ Feels like I’m on air,” he sighs, multi-tracked harmonies tightly woven round. Lead single “D4A” similarly pairs rollicking acoustics with bittersweet lyrics, the kind of heart-on-sleeve sincerity wherein a well-crafted playlist and a stolen glance are the ultimate signs of romance and verbs in the past tense cut the deepest.

Throughout the album, the immaculately arranged compositions provide the perfect frame for smooth and rosiny vocals. Utilizing a series of reel-to-reel tape machines, Auld chose to meticulously stack his instrumentation rather than simplify; some songs have dozens of instrumental tracks, all assembled on tape. “I’d record three tracks, bounce that over, and then record another three. I did it alone and it took a long time to figure out what was possible,” he says. “I went through two four-track recorders, an 8-track 1/2″ reel-to-reel, and finished the album on a TASCAM 388. One of the biggest challenges of the album was fixing all the broken old gear.”

Even utilizing vintage, rough equipment and recording at home, Lemongrass is composed of sleek and sturdy recordings that fit together like puzzle pieces. Like a hushed Jeff Tweedy, Auld pushes “You’re a Ghost” forward on limber percussion and stair-stepping electric riffs, rounded out by layers of acoustic guitar and wobbly haunted solos. Elsewhere, he channels the shambolic glory of The Byrds on “O Athena!,” the sort of multi-part harmonies and shoulder-swaying rhythm that will be perfectly suited to a full live band on the road. “I’ve always seen gigs as the reward at the end, because the recording process was so solitary,” Auld says.

Though primarily driven by acoustic guitar and mellow vocals, Lemongrass finds deep inspiration in the indie rock heroism of Teenage Fanclub and the retro-cassette garage energy of Tony Molina. Auld’s guitar solos shine brightly on tracks like “International Space Station,” rippling skyward and infusing a bolt of lightning into the mix.

As the record rounded into shape, Auld gained a powerful boost via the mastering of Carl Saff, and the studio polishing at Canyon Sound. “I was really lucky to meet the studio owner, Nicholas Dover, who gave me the space and guidance to make the songs feel complete,” Auld says. “His kindness and support has been incredible.” Each night after work, Auld would make his way into the studio to record finishing touches, and then bring the tracks back home to mix. “So many of my memories from those four years of recording are frustrations, but working through them got me closer to being able to produce what I could hear in my head in reality.”

With each new listen, Lemongrass becomes a fonder friend, Auld’s heart-on-his-sleeve lyricism and intimate songwriting building a deeper nest. “The time is ours/ Our time is now,” he insists on the psychedelic wonder of “Our Time Is Now,” more certain and wide-eyed than urgent. Through first love and heartbreak, dawns and apocalypses, Lemongrass keeps turning, collecting flickers of astral bliss with each rotation, Auld’s thumping heartbeat at the core.