Tunisian prog outfit Myrath, has released a new single titled “Born To Survive,” along with the video for the track. The song is from the bands upcoming album “Shehili,” which will be released on May 3. The videos is footage from the band’s live performance in the legendary Carthage amphitheatre, which is a venue in the bands home of Tunisia.

The song is described as a track that is:

Dear to the band’s heart and one that stands out in defining the sound of “Shehili” and therefore the elegant fusion of powerful melodies with exceptional lyrics. “Born To Survive”, a song that captivates through its heavy rhythm and Andalusian influences, is prove that MYRATH’s interesting take on foreign sounds never compromises the band’s true heavy metal fashion. This combination, referred to as “Blazing Desert Metal” is what makes MYRATH worth a listen – that and their undoubtable talent for creating mysticism and wonder.

The band’s first live performance in 2019 Will Take Pl. at the legendary Sweden Rock Festival, and then Wacken Open Air. 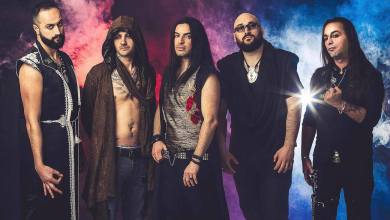