Russian symphonic metal act Imperial Age have announced that the crowdfunding campaign for their third album, ‘New World,” has begun. ‘New World’ is the successor to the band’s 2018 release, ‘The Legacy of Atlantis’, and will feature 12 songs, including a massive 20-minute track, ‘The Call of the Towers.’

The band has also released the cover art. 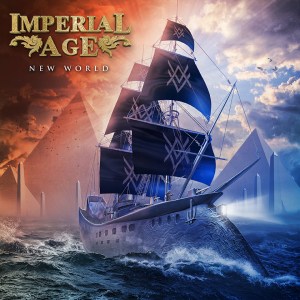 The cover was painted by Darkgrove’s Jan Yrlynd under strict instructions from Aor and Jane (the band leaders) and is actually a ciphered text written in the same metaphoric language as the Tarot cards.

The band is trying to raise a minimum of $40,000, which will go to producing the album as well as five music videos. If the band exceeds their minimum amount, they will be introducing stretch goals for more music videos, tour dates, and more production in their content.

The campaign will last for 30 days, and there are currently seven different levels of pledges with various rewards ranging from a digital copy of the album to various merch bundles.

The band talked about why they decided not to side with the label and go the independent DIY route by saying:

Over the past year we were contacted by 3 record labels.

In all cases the negotiations ended with us saying: “if we sign that deal we will need to find ourselves a day job”.

Labels not only take 87-90% of all music income. They also deduct most of their promo expenses from the musician’s share – the remaining 10-13%.

So yes, they would give the cash. But it would be a loan, which we would have to pay back from our 13%… and other things which are good for them but bad for us (for eg. 50,000 of you learned about us from our ‘7 free songs’ offer – which is totally impossible under any label).

Most bands are signed when they have no fans – and thus have no choice. But we are blessed to have you.

And we decided to remain independent so that we can keep this special relationship with you.

You can check out the campaign at this link.