Today we’re bringing you the premiere of the latest single and video from Denver-based pop punk newcomers, The BRKN. Coming off the release of the debut single and accompanying video for the song “Your Existence” in July, The bands latest track, ‘The Motions,’ is about “being stuck in a cycle of life that’s been going on for so long you’re just going through the motions,” as singer / guitarist Jacob Cade puts it. Cade also went on to describe the song, and the video as:

It’s very upbeat and fun and passionate, but it’s about something real that a lot of people go through. The Motions is about falling into a routine that makes life feel unexciting. When you’ve run out of ways to occupy your mind and the only thing left to do is go through the motions like a robot. Many people fall into that lifestyle and it’s hard to get out of… but you have to try, because there’s no fulfillment in living that way.

The video basically is just a fun concept we came up with to bring contrast to a song that is about something that isn’t fun. We took inspiration from a bunch of videos we like from our favorite bands and created our own version of it

The band’s debut EP, titled No.3 will be released in 2020 and holds a thematic thread straight from Cade’s heart as the title holds a special significance. “My grandfather played soccer in Mexico and wore the number three,” he says. “I always had it in my mind. I have it tattooed by my ear even. I wanted to name the EP No. 3, because these are such important songs to me.”

“When you listen to us, I’d love for you to feel energized and pumped,” Cade leaves off. “At the same time, I want to let you know what I’m going through. If someone listening identifies, there’s nothing better.”

The band name might be new to you but twentyone-year-old singer/guitarist and songwriter Cade, has already had some early success with his solo project and a top-40 charting debut with his song “What’s Your Problem?” Cade’s never-ending energy and live performances caught the attention of Halestorm’s Lzzy Hale and Joe Hottinger who jumped on board and co-wrote Cade’s next song “Icky Nikki.” which was produced and mixed by Michael Wagener (Metallica, Motley Crue, Megadeth).

The BRKN continue to release a series of tracks and videos leading up to the release of their debut EP, No.3 in 2020. You can get instant pre-sale access to the bands upcoming EP, by visiting their official website.

The BRKN will embark on an October tour run where they will be bringing their endless energy to high school students with on-campus performances with High School Nation, an organization dedicated to “keeping music and art alive, one school at a time!” On November 2nd they will meet up The Dangerous Summer, Arm Akimbo and Locket in Denver, CO for a show at the Marquis Theater and join them on tour for a 17-city run.

The BRKN on the web:

Scars bond us. Trials and tribulations not only make us stronger, but they also bring us together. THE BRKN unite listeners through a primal and powerful punked-up take on rock ‘n’ roll meant to be chanted loudly. Touted by everyone from Brave Words to Highwire Daze upon arrival in 2019, the Colorado band—Jacob Cade [vocals, lead guitar], Kick Stevens [rhythm guitar], and Mike Bokenkamp [drums]—tap into a universal feeling on their independent debut EP, THE BRKN No. 3.

“We’re all broken inside,” exclaims Cade. “Every human being has a broken part. That’s what defines you as a person. It heals, but it never really goes away. It makes you think and act the way you do now; I think that’s a really beautiful thing. Everyone in this generation tries to be perfect, but we proudly encompass this brokenness.”

The El Paso-born and Colorado-based frontman recognized this truth at a very young age. At eight-years-old, he watched Led Zeppelin’s The Song Remains the Same, and it proved transformative. “Jimmy Page changed my life at that point,” he recalls.
Around the same time, Cade’s older sister battled cancer. Supporting her journey to remission alongside his family, he made a pact to himself.

“Seeing her in the hospital all the time put this crazy fire in me,” he recalls. “It gave me a sense of urgency to pursue any dream I had. Life is so fragile. This weird and difficult time really defined the person I am.”

At 11-years-old, Cade played his first gig and immediately dove into writing and recording solo material. During 2016, he unleashed his debut Prince of Rock n Roll followed by the Hunger EP in 2019. Along the way, he worked with iconic producer Michael Wagener [Megadeth, Metallica] and co-wrote the breakout anthem “Icky Nikki” alongside Lzzy Hale and Joe Hottinger of the multiplatinum rock force Halestorm. Making a name for himself, he performed on stages with everyone from Steel Panther to Bobaflex. As Cade developed a passion for Neck Deep, State Champs, blink-182, and Mayday Parade, a new vision came into focus, giving birth to THE BRKN in 2019.

“I wanted to take what I naturally do in terms of rock songwriting and gear it towards a pop punk style,” he goes on. “The idea was to mix these really catchy melodies and hooks with big old school guitar-heavy rock ‘n’ roll. That was the essence of THE BRKN. Our music is something you can turn on and let loose to.”

Guided by this spirit, THE BRKN hit The Spot Studios in Colorado alongside producers Glenn Sawyer and Rich Veltrop. Intense sessions gave birth to No.3. The group debuted at Midem before taking the stage at Rockfest 2019. On a bill topped by Rob Zombie, Marilyn Manson, Five Finger Death Punch, and Evanescence, they converted the uninitiated into screaming fans.

They introduced the EP with the “F-you” anthem “Your Existence.” Galloping guitars and a bombastic groove underscore a hummable hook and the gang vocal, “I hate your face.” Meanwhile, follow-up single “The Motions” seesaws between hard-hitting riffs and hypnotic melodies.

“‘The Motions’ is about being stuck in a cycle of life that’s been going on for so long you’re just going through the motions,” he elaborates. “It’s very upbeat and fun and passionate, but it’s about something real that a lot of people go through at some point at least once.”
The EP swings from resounding delay and urgent chants on “The Only Ones Left” to the gritty pop transmissions of “Broke.”

Meanwhile, airy keys give way to a highly infectious chorus on “Haven’t Found Me Yet” as explosive melodies and galloping rhythms collide after the ring of a bell on the arena-ready “Rollin’ With The Punches.” You can trace a thematic thread straight from Cade’s heart for No.3 as the title holds a special significance.

“My grandfather played soccer in Mexico and wore the number three,” he says. “I always had it in my mind. I have it tattooed by my ear even. I wanted to name the EP No. 3, because these are such important songs to me.” In the end, THE BRKN connect by holding nothing back.

“When you listen to us, I’d love for you to feel energized and pumped,” Cade leaves off. “At the same time, I want to let you know what I’m going through. If someone listening identifies, there’s nothing better. THE BRKN can show you there’s a light at the end of the tunnel for all of us.” 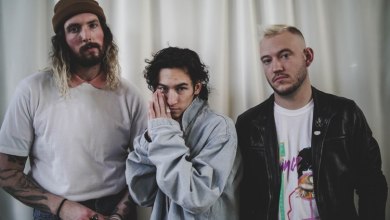 The BRKN Switch Up Their Style on New Single, ‘Lovers’