The new symphonic metal act started by Melissa Bonny, Ad Infinitum, have announced the details for their debut album, and have released a new video and single ‘Marching on Versailles.” The new album, Chapter I: Monarchy, to be released on April 3, 2020 via Napalm Records.

The spellbinding debut grabs your demons by the horns with an intoxicating symbiosis of boasting, energetic and uncompromising metal, set atop a rousing journey throughout history. Escaping the Black Death and transporting you to another era, “Marching On Versailles” breaks in with thrashing drums and stormy guitar riffs. The first single mirrors a bittersweet prologue containing their haunting expedition through the constraints of monarchy. Charismatic singer Melissa Bonny, known from RAGE OF LIGHT and as the Queen of the Damned with the WARKINGS, casts a spell over her audience. Her finely differentiated spectra spanning crystal clear vocals and deep, vibrant growls emphasize the symphonic soundscapes with vigor.

Along with a visually stunning music video, AD INFINITUM underlines their magnificent mysticism – the band’s impressive dark plague masks guide you through the hammering jaws of time. Spiced with a dash of the theatrical, they let the presence flow through to the tips of your fingers and embark on a frantic voyage through the depths of time.

The group spoke about the album by saying;

After many months of work in the shadows, it is a pleasure and almost a relief to finally reveal the first single of our debut album “Chapter I: Monarchy“. We hope that this one and the following ones will captivate and seduce you. Doctors strongly advise to play it loud and repeatedly.

With Chapter I: Monarchy, AD INFINITUM puts a spell on the world and surges right into the heart of epic symphonic metal with full force. Melissa Bonny’s multi-faceted vocals fill every fiber of the anthemic “Demons” — from powerful, fragile highs to deep growls, the track will send shivers down your spine. The energetic and equally melodic soundscapes of the vigorous ballad “Fire and Ice“ perfectly illustrate the heart-wrenching tones of AD INFINITUM.

“The time has come, finally! We are very proud to present to you the first chapter of the band’s history. We invite you to listen to it daily… You know what they say… AD INFINITUM everyday keeps the doctors away. Or does it?” 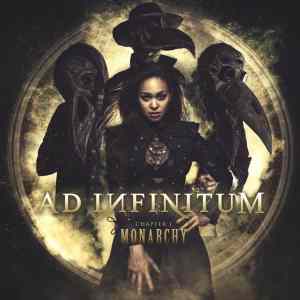 Catch AD INFINITUM live:
AD INFINITUM are heavily touring though Europe with their label-mates SERENTIY and VICTORIUS this spring. Get into the symphonic vortex and catch them live on stage: