Up and coming Progressive metal artist and drummer Vicken Hovsepian has achieved a major milestone recently releasing his 3rd EP “To The Wolves” on March 20th 2020. An independent artist from California, Hovsepian has made his way onto the scene touring internationally with thrash metal band warbringer and is now pursuing his own artistic endevours. I caught up with Hovsepian and had an interesting dive into the creation of this incredibly well crafted EP “To The Wolves”.

What were some of your musical influences for “To The Wolves”?

My main musical influences for this EP come from a lot of modern progressive metal/djent groups like TesseracT, Periphery, Plini, and Animals as Leaders to name a few. They were all very influential in my rise as a composer, and I feel like this EP specifically paid a lot of homage to all of those groups that really had a heavy influence on me during those years. A lot of my musical ideas also come from just the environment in general. When I think of certain environments (snow, forest, oceans, etc.) I often associate them with a certain type of feel/sound. I did my best to incorporate how my brain interprets those things into the world I crafted for To The Wolves.

What is the significance of the “Wolves”? I can’t help but notice that the cover art resembles a yin and yang symbol with the black and white wolves and the opposing color dots on their heads, how does that relate to the theme or concept of the EP? 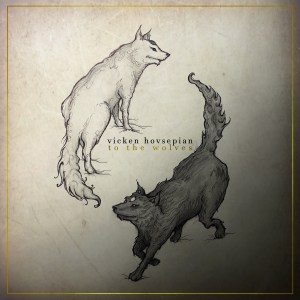 Ahh, the age old question! The wolves are a representation of light and dark, one cannot exist without the other. The whole birth of this EP came from a short story I crafted in my dark little brain. It’s set in a snow covered forest at first, with a main character running away from these wolves (the one’s depicted in the cover).

He has no more will to live, and while he may be running, he is ultimately awaiting his inevitable death. That’s what the opening track To The Wolves is about. Forest of Pillars takes place after a seemingly long amount of time has passed on this traveler’s journey, and the wolves have let him be (or so it seems). He enters this gorgeous forest full of mysticism and surrealism. But soon he realizes something dark is at work, and is being hunted by yet another dark entity.

The forest then turns into a dead forest in the middle of winter, and this haunting presence finally reveals itself. The surprise is that the creature that was hunting him down was actually an embodiment of the traveler and all of the darkest parts of his being. Again, it’s another highlight of the battle between the light and the dark. The Shrine is a short interlude track that is intended to be a resemblance of multidimensional travel through the cosmos, hence why that track sounds as mad as it does.

When we get to the closing track, Home, we now get a glimpse of the light side of our traveler. He is led by a cloaked being through this beautiful Icelandic scenery during a harsh winter until he is eventually brought to a village. When he reaches that village, he sees a very large building at the top of a hill and makes his way there. Once he gets there, he is greeted by the leader of the village; the older version of himself.

In the end, we now understand that our traveler has gone to some form of afterlife, and is finally at peace with the inner turmoil he faced in the mortal realm during his final days. So ultimately, the main point of this whole entire EP is the battle that we will always face between the light and dark that lives within us, and how that struggle will ultimately lead us to become the people we are meant to be in the end.

The light cannot survive without the dark, and vice versa. It is up to us to find that balance and to not allow ourselves to be completely overtaken by one side or the other. So I guess that’s kind of the very long answer to your questions here!”

What role did your heritage or other traditions play in the inspiration or concept of the EP?

As far as my heritage (Armenian), I can’t really say that I derived much influence from my own culture for this batch of tunes. While I was writing these songs, I was exploring more of the spiritual side of my existence. I used to be a complete atheist, but over the years I managed to find that there is so much more depth and beauty to the world when you abandon that way of thought.

What was the writing process for the music and or lyrics? Did anyone else contribute to the writing or the realization of the EP?

The writing process for this EP was absolutely grueling! It started with some very basic themes and motifs that I had lying in my back catalogue back when I was finishing my second EP, The World Beyond. Of course, I needed to finish that EP, and couldn’t initially act on those ideas, so they kind of just remained in the background for a while. Once I finally started writing, my main goal was to finish the horizontal structures of the songs (start point to end point), while having at least a basic notion of what some of the vertical/orchestrational structures might look like (drums, guitars, strings, etc.).

So it took me MANY months of grinding away at these tunes; finding ways to connect all the themes across all the songs, and just overall trying to have a very cohesive expression of these ideas and how they’re intertwined. Once I had horizontal structures, my next step was to flesh out detailed drum parts so I can track them in the studio. After that is the very hard part, vertical structures.

When you explore the full realm of things that are possible for this, it’s absolutely overwhelming. You have to pay attention to the most minute of details; is this the right tone for this synth pad? Could I beef up the harmony here? Should I add some additional textures? WHAT ARE THOSE TEXTURES?! You know, just typical brain fighting itself.

As far as lyrics go, I usually base my lyrics off of poems I’ve written in the past that reflect the world that I’m trying to paint. Lyrics always come pretty naturally to me, and I always find that process incredibly fun! Nobody else contributed to the writing aspects, but I have to give a HUGE hand to all my musician brothers that were a part of this project.

They all added their own voice to the parts I had written out for them, and this EP would have honestly not come out at the quality that it did if it wasn’t for their performances. Also a shoutout to my engineer Frank Rosato, because he absolutely crushed the mixing and mastering on this EP.”

Being primarily a drummer do you begin a new song with the drums in mind first?

You know, it varies quite a bit. A lot of times I’ll hear a fully realized section in my head with all the instruments present. It’s then up to me to figure out exactly what colors and textures I’m hearing in my head. The drum parts always come pretty easily for me, and they’re definitely kind of included whenever I write a section. I wouldn’t say that I start off with the drum parts though.

I think the only exception I have for that is the drum intro to Forest of Pillars. I was just messing around at work on my break one day and came up with a cool pattern. Then I thought to myself: “DRUM INTRO HAHA!”, but that is a pretty rare occurrence for me to write from the drums first.

I heard you say this is your first time singing on a recording, what made you decide to make this your singing debut?

This is a kind of funny story. I was actually fighting to NOT sing on the title track. My original plan was to have my singer Jeremiah Gray (who sang on Home), but he didn’t have the time available to devote towards To The Wolves as well. That song is kind of a nightmare rhythmically, and really requires a lot of time to internalize a lot of it.

So the only other option was to have myself sing it given my time crunch and the fact that I already knew the song. It was terrifying, but I’m incredibly happy I did it and will probably sing on some future releases as well.

The recording process was taxing, but it went a lot smoother than it has in the past. I’ve gotten much better at playing producer in the studio, and it helps that my musicians know my processes and workflow as well. It saved us all time. I tracked drums first while playing along to a click and my pre-production demos. Then we went to guitars, which is always challenging because there are a lot of rhythmic elements that really push Will (my guitarist). But, he always rises to the challenge and CRUSHES it.

After that we did vocals, which took a full day in the studio. It started with myself tracking To The Wolves, Jeremiah tracking Home, and then capped it off with Barry singing Forest of Pillars. That was a LONG day. Last we did bass, which was incredibly smooth. Alex (my bassist) is always so solid, and just seamlessly kills it like it’s fun and games for him. I think the hardest part of all of it was just making sure I had every single layer of music and orchestration accounted for in all of the studio sessions. I had a bunch of papers with checklists to make sure I had all of that covered.

What’s next? Any plans for the future?

Well, the initial plan was that we were going to start playing shows and hopefully do some support tours with larger acts. But, you know, the world fell to shit HA! So that kind of got screwed. I’ve been reassessing my plan of attack, and intend on hitting a few more studio projects over the next couple years.

1) I’m currently working on a few songs I never completed writing from my time playing in Warbringer and Novareign. I plan on revisiting those initial ideas and completing them with my now much more comprehensive skill set.

2) I’ve been conceptualizing a couple of chamber rock pieces that border the territories of rock and classical music. So it’ll be a little bit on the softer side compared to previous releases, but will still retain the progressive elements that are associated with my music.

3) I have another EP planned for the future, this time dealing with the theme of space and the cosmos. It’s still in very primitive stages, but I’m absolutely excited to explore this world I’ve been crafting in the cosmos over the next year. I’m hoping I’ll have a few special guest vocalists featured for this EP, but I can’t confirm any of that information yet.

A fan of progressive and melodic music will have much to look forward to in this EP. Full of tasteful proggy riffs, synth pads, melodic singing and exciting drum work, this is a finely crafted composition and is truely a hidden gem. I look forward to seeing and hearing more from Hovsepian in the future.