I recently spoke with Fenrier of Varg about the band’s new album which was recently released, Zeichen. (Available at the following link)  Fenrier discusses in-depth about Varg returning to the Viking/pagan roots of their first album, the bands new singer, Fylgja, and what a return to the stage might look like once touring begins again.

Thanks for taking the time to talk with me; how is everyone doing?

Were all doing fine. Were just super nervous with the new album release, and the reaction from the fans has just been amazing. Because we have so much work to do at the moment, we don’t even really have time to enjoy this release.

Congratulations on the release as well; it’s a fantastic album.

It’s been a couple of years since your previous release. Four years in fact, how long have you been working on Zeichen? 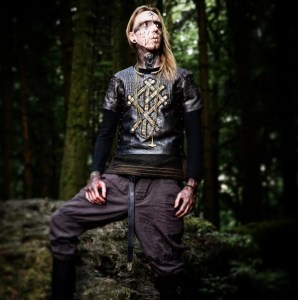 What would you say has been the biggest change for the band? And though you’ve gone back to your roots, would you say there has been something that has remained the same throughout the years?

It actually hasn’t been that long. We started putting together some ideas about a year ago. We all met up at the rehearsal room, and I just want to say the only good thing that can be said about this coronavirus is the fact that we finally had time to get together and record music. We have been in the studio for like two months, and the process has been really cool and relaxed this time.

Covid-19 has impacted so many bands in such a negative way, but it sounds like you guys tried to make the best of a bad situation by recording this record.

That’s right. Well, we were going to have to record this album anyway, but given the situation, with all this corona stuff that’s going on, we had time to put more energy into this album.

The album is being described as being something quite different and marking a new era for the band. Would you agree with that assessment that this is the beginning of something new for the band?

It’s not necessarily anything new it’s more like going back to our roots. We started the band about 14 years ago, and our first album was 100% a pagan metal album. We changed our style a little bit throughout the years between our first release and this one. We had become more modern metal, but now we’re going back to our roots. All of our lyrics are of the same theme, and the music, in general, is just more pagan again.

Speaking of lyrical content, 793 is a great opener in terms of the song itself and setting the tone for the rest of the album. Which, of course, is the beginning of the Viking era. The tracks feel unique and like something we’ve never heard before in Viking metal, Pagan metal, and Folk metal. Did you go in with the mindset of trying to avoid repeating what’s been covered before and the norms within those genres?

That’s true. 793 is the start of the Viking area and the rebirth of Varg, so it’s like, bam! Here we are. That’s also why we put it as the album opener.

The biggest change that we’ve got a new band member for female vocals. We have one song on this album that is a female lead. She also appears on the other tracks as a background singer and joining in on the chorus. She also brings a lot of new inspiration into the band.

We’ve changed everything with the concept of the album. Everything from the artwork to our stage clothes and our makeup. Before, we were mostly just covered in blood and mud, but now we are a bit more authentic to the real Viking warpaint. Our stage set up is more accurate than before. Are you familiar with the series Vikings?

The guy who does all the clothing also makes our stage clothes. So it’s very authentic and very expensive! It just looks great and totally fits our new/old style.

You mentioned your new singer, and I, too, feel like she’s been a great addition to the band. It’s good to see the duality of the growls/harsh vocals mixed with a clean style. I know you released a new video featuring her track a few days ago, which was excellent.

Yeah. Because everything that’s currently going on with the coronavirus it was hard to find time to shoot the videos. Because normally we go to Poland to shoot our videos, but this time we weren’t allowed. So we had to find some guys that could shoot the video here in Germany, which was really hard because everyone was booked out or something like that. And we just made it. I think we finished wrapping up the video just five days before the release.

So many bands are having that issue right now with being unable to film videos. We’ve seen an abundance of lyric videos through recently!

Yeah. But a lyric video just wasn’t an option for us because we love this album so much. It’s by far my favorite Varg album, and we love it so much, We decided that we need real music videos for this. Which was a lot of work.

What I love about your new material is that it feels stripped down and back-to-basics, yet still incredibly rich and ambitious. How did you manage to blend these musical worlds? Did you go in from the beginning wanting to rediscover your roots, while trying to keep things fresh and new?

Anytime we start recording a new album, we always start with the guitars. So the guitar player has some ideas, and this time around, we have two new guitar players on this album. The good thing is that these guys have listened to us for many years before, so they know all of our material. Before we started recording, we all sat down together decided that we were going back to our roots because it fits so much more, and we enjoy it so much more.

They totally nailed it on the guitars. I don’t know how they did it. The singer and I were just sitting in the rehearsal rooms, and we just said, yes, this is the new sound. So after the guitars were finished, we gave it to her singer, and he totally managed the lyrics. There was really no special trick, it was all just magic this time. It just all came together, we don’t know why but it just worked out so well.

How important is the narrative aspect in your music compared to the purely instrumental/performative side of it?

It’s really important to us. We live in Germany and there’s just woodlands and forests everywhere, and it’s ice-cold in the winter. This feeling always surrounds us. And we started off at an early age so the lead singer and I believed in the old gods, and are totally into that. So it was just very easy for us to make lyrics about Vikings, and the old gods.

There is also a bonus disc that features many great artists as guests on the tracks. How did you go about deciding who you would want to feature on the record and work with?

All the singers on the bonus disc are good friends of ours. They’ve known us for so many years. We’ve toured with Eluveitie fix or six times. Plus, there are so many other great singers from the German metal scene, and it was really easy to decide who is going on the album because we love all their voices. It’s so impressive when I listen to the second album because every singer puts their own style onto the song, and it’s like an entirely different song for me at times.

The title track was your first single release, and I feel as if it was a great choice because it perfectly encapsulates the direction that you’re going now. If you had to pick only one song off the new album to represent your band and it’s new, or rather older direction, which one would it be and why?

My favorite song is Fara Til Ránar Because there’s so much emotion into it. And I just listen to the song over and over again as it brings good feelings into my heart. So that would be the song that I would choose, as it’s also my most favorite one on the album.

What are your plans in the near future in terms of gigging and spreading the word about your record?

We booked a tour for 2020, and normally we would start in October, but most of those dates are canceled right now because Germany’s waiting for the second wave of corona. So we tried to switch some of the shows into the spring of next year. So we will see. I can’t wait to bring this album out in a live setting, but it’s really hard to say when will be back.

When you do go back on the road, what can we expect the setlist to look like? Are you looking more at working in the new material, or will you also play some fan favorites as well?

If it were me, I would play the entire new album from beginning to end, and then maybe make 1/2 an hour of a best-of set. But I’m pretty sure there’s going to be a lot of new songs mixed in with some super old school best of songs.

Sounds good! We are all looking forward to seeing you back out there. Thanks again for speaking with me, is there anything else you’d like to say to our readers and the fans?

It’s a really difficult time for all of us, and the entire world. I really hope we all get through this very soon. And we would love to see you guys all again on a new North American tour! Thanks for having me.