Los Angeles based Americana Gothic outfit Heathen Apostles recently put out their latest studio album, “Dust to Dust,” and soon followed up with a European tour in support of the release. I spoke with Mather Louth and Chopper Franklin about the album, the tour, and where the band might be headed next.

Now that your European tour has just ended, can you tell us a little bit about what that experience was like?

Mather: In a word: a whirlwind! Which is actually quite surprising, being that it was essentially 5 weeks long and our longest European tour to date. But, it was incredibly inspiring, not only because of all of the sights we were able to take in, but also because of all of the connections we were able to make with fans (both new and existing alike.) Our tour took us everywhere- from the hustle and bustle of big cities to some beautifully remote locations- and that in itself provided a beautiful variety of experiences.

As much as playing 32 shows in 32 days was exhausting, it was equally exhilarating thanks to the adrenaline of performing on a daily basis. As a singer, I was pushed to my limits, but the genuine love for performing allowed me to keep hitting the reset button every night. You can never tell what each day will bring when on tour, so you just try your best to enjoy the highs and (as cliched as it sounds) maintain a sense of gratitude to have the opportunity to share your music with people that truly appreciate it.

What was the writing and recording process like for Dust To Dust?

Chopper: While we were on last year’s European tour we talked about what kind of album we wanted the next one to be. The previous album, Bloodgrass Vol. I & II was dark, but also really rootsy, and we thought this one should have a heavier mood.

As soon as we got home I began writing music that reflected that vibe, and then served the demos up to Mather for lyrics. Since we record in my studio we are able to build on the demos, and Thomas and Luis come in and do their parts. By busting it out this way we were able to have the album out for this year’s tour.

Would you say this album is different than your previous works? If so, what sets it apart from the rest of your discography?

Mather: I wouldn’t necessarily call Dust to Dust “different” so much as simply the latest chapter in our story, so to speak. Looking at it from a technical standpoint, certainly the production of it is the most advanced out of any of our releases, and from an artistic standpoint, I think my approach with regards to composing background vocals has evolved quite a bit on this release.

This new record is very diverse. Some songs are faster and more energetic, while others slower and eerie. Did you set out to achieve a specific mood for this album?

Chopper: Yes, we definitely wanted to make a very diverse record, that is something we shoot for most of the time. The first rule we have for a song making it on a record this that it is good, so it was sort of kizmet that the best songs were all pretty different from each other.

I’ve always felt that storytelling is something that really brings Americana and Goth music/aesthetics together. What do you think is the stronger point of the connection between the two genres?

Chopper: I think the two genres compliment each other really well. You’re right, old-timey Americana songs told great stories; whether it was a song that evolved from a 17th century murder ballad, or a Depression-era ode of tragedy. But with roots songs the lyrics almost always set the mood; with Gothic music there is a story too, but the music has a heavy hand in setting it all up.

I’ve found that those that listen to Bluegrass and folk seem to have come from a place in which those listening habits were influenced at an early age. Be it from grandparents, or parents. It seem likes it wasn’t until a few years ago artists like Ralph Stanley were considered “punk rock,” and connected with a younger demographic. Were those styles something that you listen to growing up, or are they your own discoveries?

Chopper: I discovered I liked country music pretty early on via the great trucker movies of the 70’s; I still consider “Eastbound and Down” by Jerry Reed (from Smokey and the Bandit) one of the greatest country music songs of all time. My dad also listened to a lot of country music, he played a lot of the Outlaw movement songs that I liked, but he also played things like Kenny Rogers, so I figured out what I didn’t like too, haha. Then punk rock came along but the first two bands I was in were heavily roots-influenced; the Mau Maus (R&B) and The Joneses (country and blues). The Joneses were among the first cowpunk bands around at the time.

I love your rendition of “In The Pines.” What led you to cover this song?

Mather: As you might have guessed, Chopper and I have always shared a deep affinity for old, sad songs- after all, it’s partly what bonded us when we were first in talks about the band. “In the Pines” (and its counterpart “Where did you sleep last night?”) has always been one of those songs that can put your hair on end, no matter who is singing it.

So, you could say that it’s been on my shortlist of cover songs. While we’ve performed the song live prior to this album, we did more of an uptempo version based off of the Bill Monroe recording. For the album, I wanted an arrangement that was spookier, and after searching, I stumbled across the Kossoy Sisters recording and fell in love with the storytelling. And, the rest is history!

If you had to pick only one song from Dust to Dust to introduce your music to a new listener, which one would you pick and why?

Mather: Very hard question! Usually, I sort of tailor recommendations on a case by case basis, but I think “Burn It to the Ground” is a solid contender (since it combines a lot of what we’ve come to be known for, and is also catchy as hell.)

But as far as the roots end I would recommend “Rise”; it just captures alot of our influences in one song: spaghetti western, bluegrass, etc. On the dark side I would recommend “Through the Forest, Through the Trees” for the same reason; it shows our love for gothic ballads, dark classical music and minor-key melodies. 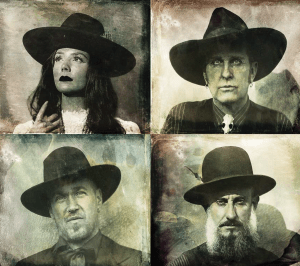 Of your new material, what would you say is your favorite song to perform live?

Mather: I would say that it’s a toss-up between “Rise” and “Two for the Road”- both have gotten a really consistently positive response from the audience and are equally fun for us to play as a band.

Any plans on touring the new album in the states?

Chopper: We are currently touring the Midwest and we are talking about more tours. Touring the States takes a bit more planning than touring Europe believe it or not, cities are more spread out so we can’t play every day like we do in Europe. So we always need to figure out the most efficient way to do things.

Mather: I’ve always had a wandering spirit (hence why I’ve always felt a deep connection to Hank Sr.’s “Ramblin’ Man”), so being on the road feels oddly natural to me. We’d love to keep hitting the road in the States and are hoping to be able to do it more frequently in the future, as it’s been a great way to meet and connect with our homegrown fans.

Thanks for taking some time to chat with me! Is there anything else you’d like to say to the readers?

Mather: Thanks for having us, and be sure to stay tuned as to our future plans via Instagram (@heathenapostles), Facebook, as well as our website www.heathenapostles.com! 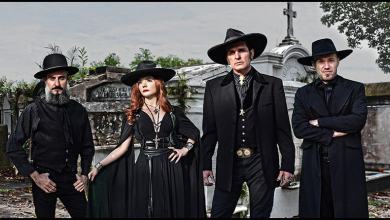 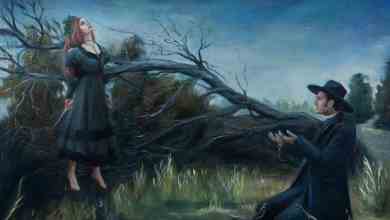