Today we have the exclusive premiere of The Dollyrots latest video, “I Know How to Party.” The song is from the bands upcoming album, Daydream Explosion which will be released on July 12, 2019. Pre-orders are available at the band’s web store, as well as streams which you can find here

We also had a chance to speak with the band about the upcoming release, as well as the recording process, and being parents on the road.

Thanks for taking some time to chat with us! You recently wrapped up recording on the new album, and I know you’re preparing for release party, as well as a tour, so you’ve got quite a bit going on, how are you guys feeling about everything?

Luis: The short answer is we’re incredibly excited. But it’s kind of like getting ready to play a big show, you know? Excited with a mix of confidence knowing this is the best album we’ve ever made, with a sprinkle of anxiety about what people are going to make of this record. We don’t really have too much time to think these days so it’s one foot in front of the other. Life feels like it’s in hyper-speed and we’re just along for the thrill of it right now.

You documented a little bit of the recording process of Daydream Explosion, (which fans can check out on your YouTube channel,) but can you tell us about what that process was like, and how was it working with John Fields?

Luis: This is our 6th album with John, not counting EPs and singles. So at this point our working relationship is super fluid. If you’ve never worked with him before I can see how it would be kind of intimidating; here’s a guy with platinum credits. We walked into the live room and Nick Jonas’ vocal sheets were on the music stand. And as a Producer he works incredibly fast.

But at this point we’re basically able to read each other’s minds so that makes the process that much faster and more fluid. We’ll be listening to a part playback, I’ll say “hey that guitar…” and he’ll cut in with “needs a high part above” it… and within a few minutes it’s recorded and blended in with the rest of the mix.

The same things happen with vocals, keys parts. We did a bunch of pre-production at our home studio to set up the basic song structures for “Daydream Explosion” but the actual production time with John amounted to less than a week total, including a couple days cutting drums at Pachyderm Studios with Noah Levy – a truly fantastic drummer.

Would you say that your creative approach for the new record has changed a lot when compared to your earlier releases?

Luis: It’s changed in a major way. We had our entire adolescence to write the first album, “Eat My Heart Out”. And the next couple albums were the products of a young, fairly naive band pounding out ideas on the road and in our practice space over the span of months, even years. Back then we had the time to second-guess ourselves, rewrite things, and demo songs again and again. There have gotta be at least a dozen recorded versions of “Jackie Chan” for example.

But since having kids, and kind of as a byproduct of growing up, we have so much more going on in our lives now. Adulting is hard! So there isn’t really time to go with anything beyond our first gut instinct for melodies and lyrics most of the time. Which I think is better for us at this point. The songs feel immediate. There’s an urgency and playfulness to it all. It keeps us from taking things too seriously.

Speaking of which, if you had to choose one song from Daydream Explosion to introduce to new listeners that are not familiar with your past discography, or perhaps even listeners rediscovering your music, which track would you choose, and why?

Luis: We’d probably go with “Everything”, the lead single. It sums up exactly who we are both as a band sonically, and tells the story about the nature of our relationship. It’s positive. It’s hopeful. It’s about how we do this for each other, for our kids. And it’s got that gritty three-chord bubblegummy Ramones thing that’s been a staple of our sound since the very beginning. Oh and it’s got a BIG chorus, which is mandatory.

How much of the new material have you been performing on the road? And how does it feel to play those new songs in a live setting?

Luis: It’s a giant breath of fresh air! Not that we’re tired of the older material; in fact, we love including older songs in the set because they feel familiar and there’s freedom of expression in familiarity. But the new songs just feel so good. People respond to them, even when it’s clear it’s the very first time they’re hearing them. And that’s huge for us. It means the songs have legs. And it means once the fans hear the recorded versions they’re going to go bananas. Right now we’re playing “Everything”, “Animal”, and “In Your Face” live but that number is likely to increase.

I absolutely love the album, so I’d imagine the new tracks are getting a great response from live crowds, but I think the true critics here, are the kids. Some of the most brutally honest reviews I’ve seen, have come from toddlers. How do you think it has it been for your children having music be such a big part of their lives, is it exciting for them, or are they just bored with it?

Luis: We’ve always been pretty neutral about it with them. We don’t push things one way or the other. They clearly see us writing and recording at home. And they tour with us so the road’s just been part of their existence since they were born. And the result so far is they just consider themselves part of the band. Our 5 year old, River, just started insisting to come up on stage with his guitar. So we’ve been doing that the last couple tours. And our 2 year old Daisy clearly has her favorites off the new album. It’s just part of the family business to them.

I know a lot of artists that would love to bring their kids along with them, but they seem to struggle with it quite a bit. Everyone’s circumstances are different, but what general advice would you give to parents out there that are looking to bring their children with them on tour?

Luis: Just to not be afraid of the logistics and small stuff. Things always work themselves out, the little details tend to fall into place. The kids will eat, you’ll find things to keep them occupied, and in the end they’ll grow a ton on the road just as a product of being in new places and interacting with lots of new, different people. Traveling is incredibly awesome for kids.

They just sponge it all in. All I’m saying is, kids tend to go with the flow and will follow your lead so don’t leave them at home! And obviously it helps a ton if two parents are involved. It takes both of us and a full time tour nanny to keep things on the level and under control. 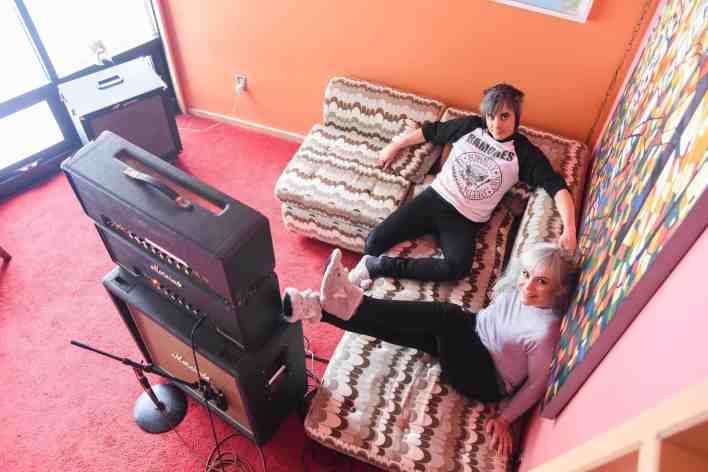 In today’s music scene, genre definitions are becoming increasingly blurred. Artists who have been associated with the aesthetics of punk often explore other sounds, and others who aren’t normally known as punk acts dabble into more aggressive, “traditional” punk tones. What does punk rock mean for you in 2019?

Luis: For us, aside from the basic idea that punk is a form of free expression, we also hold the opinion that it should be challenging to the listener. Whether that means a vocal that’s sung emphatically, or tones that aren’t digitally perfected to a place of boredom. It’s gotta have something unique or wrong with it, if that makes any sense.

That’s what’s so beautiful about guitars; every single one sounds a little different and they’re never quite tuned perfectly. It’s a good thing that genres aren’t as strictly defined anymore. I just wish music in general was a little scarier. People shouldn’t be afraid to sing loud or obnoxiously.

Are there any other upcoming albums that you guys are excited for, or have there been any recent releases that you can’t stop listening to?

Luis: The latest Skating Polly record is pretty great, and the new Stray Cats single sounds like it’s straight out of 1983 – which is awesome. The Interrupter’s release last year was super solid, same with the new L7. There’s also a young band out of Dallas called Not Ur Girlfrenz who are the future of rock n roll.

Oh and Kelly’s side project with our buddy Jaret Reddick of Bowling For Soup just came out this past March too, it’s a quirky and amazing blend of pop, rock, and even a hint of country western.

You’ve toured with a lot of great bands throughout the years, and if you could share the stage with any other band that you’ve not worked with, (active or not), who would you pick and why?

Kelly: Oh man… Nirvana. Our band was shaped by that band in a lot of ways. They were always vocal about other bands they liked, and their politics. Without them I wouldn’t have known about Bikini Kill, Buzzcocks, Sonic Youth, L7, Shonen Knife… and Kurt Cobain was the first guy I saw in the media proclaiming he was a Feminist. Also it would be wildly fun!

As of now, do you have any other plans beyond the festival / summer tour season?

Luis: After a July/August run up the US East Coast we’re playing FEST in Gainesville, FL at the end of October. We’re figuring out the Fall now. Will likely try to get overseas.

The Dollyrots On The Web 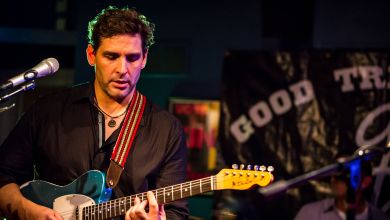